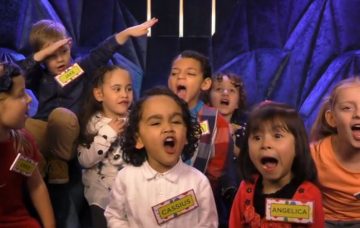 Cute or a nightmare?

Yes, some brave mums and dads let their little ones loose in the newly-created Big Brother crèche on Monday night to see whether the men or women were better babysitters.

Big Brother told the group: “Today, men and women will compete against each other in a battle of mental strength, resilience and determination.

“Today, housemates, you will try to manage a group of children.”

This being Big Brother, there was, of course, a twist.

While the housemates thought their job was to keep the kids sitting still for as long as possible, the children were actually going to be voting for the housemate they liked the best.

In super sweet scenes, viewers watched the housemates playing games with the little ones, laughing lots and generally just having a great time.

Where else will you see retired footballer John Barnes doing the twist or former MP Ann Widdecombe dancing with a giant teddy bear?!

Viewers thought it was the cutest task EVER with many saying it was their favourite Big Brother task of all time.

Some viewers were astounded, though, that Big Brother actually enlisted real life children, expecting them to draft in dolls or dummies.

But, as with everything in life, you’ll never please everyone, and some viewers admitted looking after a group of excited kids all afternoon was their idea of a nightmare!

As for the results, it was Ashley James who was voted the best-liked housemate, so she won immunity from the next round of nominations and public vote.

Taking a swipe at the children’s choice, fellow housemate Andrew Brady suggested it was the fact Ashley was wearing a unicorn onesie that made the kids like her, rather than her being the most fun for them to hang out with.