A genuine connection or attempt to boost their profiles?

There could be a romance brewing in the Celebrity Big Brother house… but not everyone is keen for it to develop.

Ashley James and Ginuwine’s flirty friendship stepped up a level last night, as they held hands under the table and Ashley referred to the American musician as “my man”.

But some sceptical viewers have accused former Made In Chelsea star Ashley, 30, and singer Ginuwine, 47, of faking their feelings in a bid to garner more airtime.

That good ol’ phrase “showmance” has been thrown around on social media by Celebrity Big Brother fans who aren’t convinced the pair are the real deal.

One wrote: “I do not see this Ginuwine and Ashley ‘romance’ as real… Showmance for screen time?”

Another said: “Sorry but this whole Ginuwine and Ashley thing is clearly just for airtime. They’re the most boring people in there so they’re trying to spice it up. NO, next!”

A third added: “If Ginuwine and Ashley weren’t checking the cameras I could almost have been convinced that was real.”

Others fans, however, were totally shipping the match – and thought the feelings were genuine on both sides.

One viewer wrote: “Every time Ginuwine and Ashley even slightly touch I literally freak out!! They need to become a thing.”

Another said: “Ashley and Ginuwine is a showmance I don’t mind watching… very slow moving and innocent! So much more refreshing than people just snogging each other on night one.” 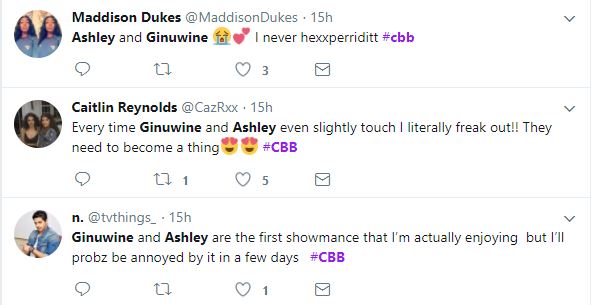 So far, there’s not really any indication from Ashley and Ginuwine on just where they see things between them going.

Although on last night’s episode, Ashley did drop a couple of hints about falling for the musician.

When she found out India Willoughby had nominated him for eviction, she told the housemates: “Sorry, but when G got a nomination, I was like [angry face]. Are you trying to take my man?”

Thankfully for her, Ginuwine won’t face the public vote as India was the only housemate to pick him.

Meanwhile, the reality star was later teased after being caught carrying Ginuwine’s laundry!

A blushing Ashley defended herself by saying she’d only taken it out of the dryer because she needed to put her own clothes in, before pointing out: “I almost folded it and was like, ‘I’m not his wife yet.'”