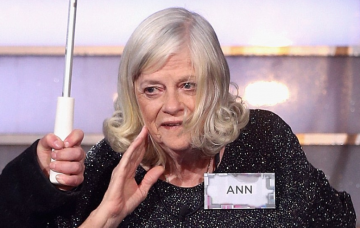 The decor isn't to her taste

Former MP Ann Widdecombe said she would “prefer a few men around the place” as she became the first contestant to enter the all-female Celebrity Big Brother house.

The political expert, 70, made a strong entrance as she stepped onto the Channel 5 reality show’s live launch on Tuesday night.

This year’s series marks 100 years since women won the right to vote in the UK. Its rooms are named after famous leading female figures and Big Brother’s traditional male voice has been replaced by a woman’s.

But when asked by presenter Emma Willis how she felt about the show’s theme, Widdecombe said: “I would prefer a few men around the place.”

She told the host that a single-gender atmosphere does not correspond to reality, before entering the house and complaining about the “ghastly” furniture.

She was followed into the house by Malika Haqq, close friend to US reality star Khloe Kardashian.

It was an emotional entrance for the TV star, who burst into tears as she hugged her “god-sisters” goodbye and described the show as “a lot more aggressive than I am used to”.

There was also a powerful entrance from journalist and novelist Rachel Johnson, daughter of I’m A Celebrity… Get Me Out Of Here! star Stanley Johnson.

Already teasing potential clashes between herself and Widdecombe, who she interviewed for women’s magazine The Lady ahead of her 2010 stint on Strictly Come Dancing, she described Widdecombe as a “one” and “a character”.

“I’m not sure if I am looking forward to it,” she said, before adding that Widdecombe would “straighten us all out”.

But it was a warm reception as Widdecombe cried “Thank God” when Johnson walked into the house and threw her arms around her.

Asked why she had decided to join the show, Johnson, who was unveiled as a housemate last month, said: “I get an offer to do this show quite often. I usually delete it straight away.”

But after discovering the series would be based around the Year Of The Woman theme, she said: “I thought to myself, if they are true to their word, this could be a very interesting experiment. I am looking forward to a girls’ night spread over three or four days.”

But, she confessed: “I’m incredibly intolerant. I’ve got the opposite of charm.”