CBB viewers accuse housemate of “bottling it” over live nomination

She didn't put her money where her mouth is

Live nominations time is always one of the most cringe-inducing segments of CBB.

Housemates have to face up and say directly to each other’s faces why they think they should be booted out.

Malika Haqq, also known as the best pal of the Kardashian empire, was the first female selected to make her nominations last night.

She’s been extremely vocal in her criticism of transgender journalist India Willoughby, so we thought it would be obvious who she’d pick – right?

Wrong! Instead of nominating India, Malika chose to select Andrew Brady and Ann, instead.

Talking about Andrew, Malika said. “I nominated Andrew because there hasn’t been bathroom tissue for quite some time and I don’t think he’s doing his job.”

Her second nomination – and second opportunity to pick India – passed by when she chose Ann, and gave her reason as: “Because I think we’re all torturing her.”

Ann immediately fired back, saying: “That’s not a valid reason. You must give another reason.”

Squirming, Malika said: “That’s the reason that I have. I feel like everyone’s always apologising to Ann for their language or whatever, so I feel like we’re torturing her.”

Rachel, however, did nominate India, saying: “I feel that we haven’t changed the record enough, and it’s changing the atmosphere in the house that we’re all tiptoeing around your quite legitimate sensitivities.”

Viewers were outraged, considering it a wasted opportunity on Malika’s part to get across some home truths to India.

One wrote: “Lost a lot of respect of Malika for the bottling out of a live vote for India.”

Another said: “Malika let me down for nominating Andrew over India.”

And a third wrote: “For the amount of bitching Malika does about India, very surprised she didn’t nominate her. Felt like a total cop out on Malika’s part. booooo.” 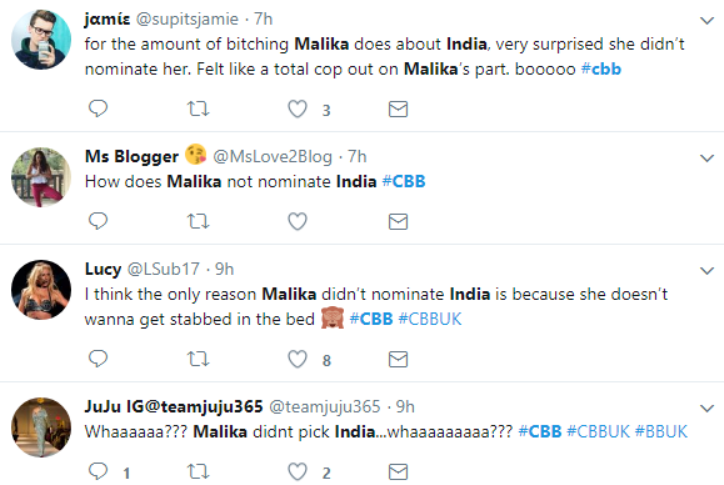 We were certainly surprised Malika didn’t take the opportunity to nominate India and possibly get her out of the house, seeing as she apparently winds her up so much.

And as India is up for eviction along with Jonny Mitchell, Malika might get her wish anyway – without having to appear as the bad guy. Smart!