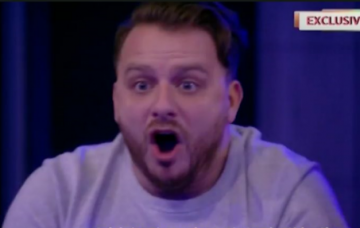 Big characters up for early exit.

The second round of nominations were exclusively revealed on last night’s Celebrity Big Brother’s Bit On The Side after the men of the house were given the power to vote.

The results came as a complete shock to all the housemates who were stunned to discover five big characters face the chop.

Gathered together on the sofas, the housemates couldn’t believe their ears as Big Brother reeled off a list of names.

Daniel AKA Dapper Laughs and The Apprentice’s Andrew were both visibly shocked when their names were called, placing their heads in the hands, while John accepted his fate with a wry smile.

Rachel could be heard saying: “You’re joking” when she heard Daniel and John were up for eviction but she fist pumped the air when her own name was then called.

She had been granted immunity after a group of four-year-olds descended on the house in the latest task.

The housemates had great fun entertaining the youngsters before the kids went to the Diary Room to reveal who they liked the best.

Ashley received the most votes which meant she was exempt from eviction this week.

Read more: Does Celebrity Big Brother have a pant thief on the loose?

One of the little girls said the MIC star was their favourite because “she was sweet and nice to people and she was really beautiful.”

On Friday night’s show, not one but two of the five nominated housemates will go in a double eviction, following in the footsteps of India Willoughby who was the first to leave last week.

She appeared on Bit On The Side last night where she admitted she was also shocked by the latest nominations.

She said: “I’m surprised Daniel has been nominated as he’s really popular in the house. He’s really funny and extremely strong.”

She then added that she “would like Rachel or Ann to leave” as she believes the “karma” of Boris Johnson’s sister is “up” after she has been stirring things up in the house.

According to the bookies, Rachel is the most likely to leave.

Who will join her is more of mystery and could all depend on how their behaviour in the house over the next few days influences viewers.

Ann could be safe as she’s recently had a surge in popularity, with bookies William Hill naming her the top female in the house and the third most likely to win overall behind Courtney Act and Andrew.

Andrew’s odds of 6/1 to win also mean he’s more likely to stay on Friday. But this is CBB so the odds could all change again tomorrow!

Tune in on Friday night to see who goes, and don’t forget to vote if you want to have your say!