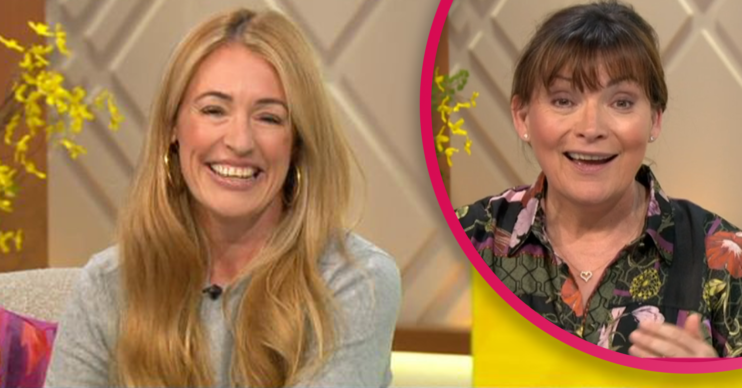 The SM:TV Live star is back on our screens

Cat Deeley is standing in for Lorraine Kelly on her ITV show this week and it’s fair to say viewers were divided as she hosted her first show today (April5).

Lorraine is enjoying a well-deserved week off this week, with Cat stepping in following her successful turn on Saturday Night Takeaway recently.

However, although some Lorraine viewers were over the moon to see Cat front the show, others were less keen.

What did viewers say about Cat Deeley hosting Lorraine today?

Many Cat fans were thrilled to see her on their screens this morning.

Posting on Twitter, one commented: “So lovely to see you on my telly this morning.”

“Great to see @catdeeley on @lorraine – we definitely need more of her on British TV,” said another.

Another added: “Is it just me or does having @catdeeley back on morning TV make it feel like the world has returned to normal?”

“Love Cat Deeley #lorraine, so professional, bright & bubbly! Of course we love Lorraine but Cat has filled the void brilliantly!” said another.

I literally grew up on SMTV and CD:UK so being in the studio with @catdeeley is like the coolest trip down memory lane! pic.twitter.com/m27GNckeJZ

‘Cat needs her own show!’

Others said they wanted Cat to become a “permanent fixture”.

“Hope this become a permanent fixture!” declared another.

Another called for Cat to have her own show.

“Cat Deeley is class. She needs her own show. Come on ITV, get on the case!” they demanded.

However, for every positive comment, there was naturally a negative one.

“Whoever thought #catdeeley presenting was a good idea must be barking mad,” declared one.

Whoever thought #catdeeley presenting was a good idea must be barking mad.

“Just when you thought #lorraine couldn’t get any worse…. Cat Deeley,” said another.

“Cat Deeley is even more annoying than Lorraine Kelly,” declared a third.

“Jesus. Just calm the [bleep] down. You’re too much at 9am,” said another.

What did you think of Cat Deeley hosting Lorraine today? Tell us on our Facebook page @EntertainmentDailyFix.