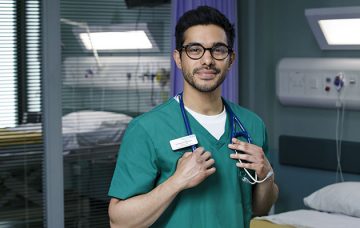 The inmate brings trouble to the ward

Rash Masum found his confidence in last week’s episode of Casualty, and viewers were very glad to see the young doctor with a spring in his step.

But scriptwriters haven’t given the junior doctor very long to enjoy the moment!

In scenes to be shown this week (Saturday 17 March), Rash is really thrown into the deep end when he is called upon to treat a dangerous criminal who’s been stabbed in prison.

Jack is a 19-year-old young offender who’s been ‘starred-up’ – which means he’s deemed too dangerous for juvenile detention, so they’ve moved him to an adult prison. Gulp.

Paramedics are first called to a prison where an inmate and a prison guard are both injured. Both are taken to Casualty, where Rash treats Jack.

However things don’t end well for the charismatic doctor when his own blood is spilled at the scene.

The criminal, serving time for violent robbery and assault, also leads Gem into danger when he tries to escape the hospital and takes her hostage.

Will Rash, who has taken a shine to the new porter, be able to save the day?

Meanwhile, Dr Ethan Hardy is showing no signs of forgiving Alicia for writing the blog. In fact, he’s being so frosty toward her, it’s a wonder she’s not wearing more layers.

When she tries to talk to him, she says: “I messed up. I don’t know what else to say apart from I’m sorry.”

However, unswayed by her emotional plea, he replies: “You humiliated me and now you’re upset because there’s bad blood?”

When he comes in with a fractured dislocation of the shoulder, the team discover he’s had a bullet in his shoulder for 36 years. And that’s not the only thing he’s hiding…

Who is your fave Casualty character of all time? Leave us a comment on our Facebook page @EntertainmentDailyFix and let us know what you think!