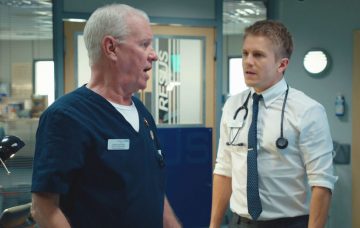 This is a bitter pill...

Ethan is on a mission to discover the person behind the “damaging and hurtful” blog, which questions his management of the Emergency Department.

And it’s no wonder it’s all he can think about after Jac Naylor – yes, quite scary – insists he get to the bottom of it.

Harsh but true words from Jac, when she warns him: “You better get busy and end this Ethan. Before it ends you.”

As Ethan attempts to uncover the truth, he has no idea that his love interest Alicia is actually the person behind the ‘Rage In Resus’ blog.

Read more: Eamonn Holmes reveals his kids tell him off for appearing on TV with Z-list celebs

When he asks her directly if she penned the blog, she swears she didn’t, indignant that he’d even ask. But it’s no wonder she doesn’t ‘fess up… He’s threatened to sack the culprit.

But surely it’s only a matter of time before he discovers the truth?

Meanwhile, junior doctor Rash is forced to face his fears when Ethan demands he work in Resus, even though Charlie doubts he’s ready. He worries aloud: “Resus is the place where people go in and sometimes don’t come out.”

And the more squeamish Casualty viewers might want to look away when a young gymnast (played by guest star Erin Hyland) and her long-suffering sister both suffer painful injuries during rehearsals.

While Donna suffers a dislocated jaw, Kacey’s fractured ankle could spell the end of her gymnastic career.