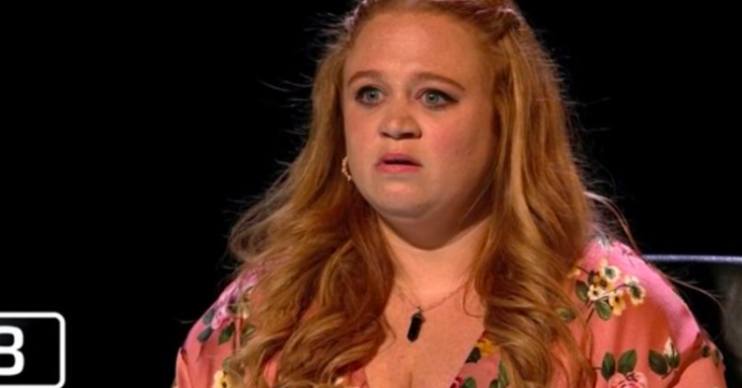 When Casualty star Amanda Henderson agreed to appear on Celebrity Mastermind, we doubt she expected to have such an impact with the viewers…

The actress, 33, looks set to go down in Celebrity Mastermind history when she delivered an answer so epically wrong it began trending immediately.

This week, Amanda – who plays Robyn Miller in the BBC medical drama – appeared on the famous quiz alongside comedian Paul Chuckle, comic and writer Geoff Norcott and chef Levi Roots – with all participants donating their fee to their chosen charities.

Amanda, who is currently portraying one of the ugly sisters in a panto version of Cinderella, revealed that her chosen specialist subject would be the songs from animated Disney films.

And she didn’t do too badly either!

However, it was during the general knowledge round that Amanda delivered an answer so amusing to viewers it promptly became a meme.

Sharon has to be best quiz answer in 2020. Great start to the decade.

Host John Humphries asked the redhead: “The 2019 book entitled No-One Is Too Small To Make A Difference is a collection of speeches made by a Swedish climate change activist. What’s her name?”

Clearly unaware of the answer, Amanda looked baffled before blurting out the guess “Sharon”.

In fact, the correct answer was 17-year-old Greta Thunberg. But that didn’t stop #Sharon from trending on Twitter.

Those watching from home were left “screaming” with laughter, and united on Twitter to herald the moment as TV history.

One wrote: “I will love Amanda Henderson forever for this. Not everyone feels obliged to genuflect before St Greta.”

Another said: “Celebrity Mastermind just now a question was asked about a Swedish girl who became a climate change activist, asking what her name was. Amanda Henderson’s reply: ‘Sharon?’ I AM SCREAMING.”

Celebrity Mastermind is an oxymoron

She had some cracking answers. She was asked one about children of a member of the Royal Family who died in 2009 & she replied .. Princess Anne. She also thought the IRA were a Political Party.

One of the actors in this scene would go onto star in a new trilogy of Star Wars films, the other would go viral for saying Sharon instead of Greta Thunberg on Celebrity Mastermind pic.twitter.com/6U6JgZA2uk

Celebrity Mastermind just now a question was asked about a Swedish girl who became a climate change activist asking what her name was.
Amanda Henderson's reply: "Sharon?" I AM SCREAMING

A third added: “I’ve been watching and laughing at it on repeat for a while now.”

“Sharon has to be best quiz answer in 2020. Great start to the decade,” added one more.

Comedian Mark Smith tweeted the clip with the caption: “2020 is cancelled” – which had 2.4m views at the time of writing.

While many saw the funny side, others felt the need to step in to defend Amanda from claims she was “stupid” branding some comments borderline bullying.

Although Amanda hasn’t returned to social media yet after the episode aired, she did promote her appearance on the show, writing on her Instagram page: “Don’t judge me. LOL.”

In the end, Amanda got four of her general knowledge answers correct, finishing the show joint second with 12 points alongside chef Levi Roots.

Comedian Geoff Norcott walked away with the Mastermind prize after winning 13 points, with Paul Chuckle coming fourth with 10 points.

Click here to see the explosive trailer for Casualty’s 2020 storylines.

Would you have known the answer to Amanda’s Celebrity Mastermind question? Leave us a comment on our Facebook page @EntertainmentDailyFix and let us know what you think!