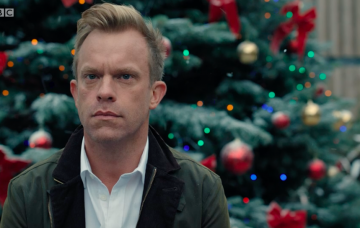 It was all too much for some fans

Casualty viewers have been left in tears after last night’s episode.

Consultant Dylan Keogh broke down in the episode after finally letting his emotions out after being left by love interest Ciara Cassidy.

She sent Dylan a Christmas card and his struggle to read it saw his friend David step in to help him.

It read: “Dear Dylan, a card from the blue, if you haven’t already torn me up you’ll be relieved to know this is simply to let you know I’m alive.

“I think of you even though it hurts, but slowly I’m finding my way.

“I’m dry, I’m well, and day by day the sun shines a little brighter. I hope it does for you too, Merry Christmas.”

The emotional message was too much for Dylan who broke down and admitted: “I miss her.”

The emotional scene was enough to have viewers of the medical drama in tears.

One fan said: “Oh my! I’m on the verge of tears watching Casualty.”

A second affected viewer wrote: “That ep was [expletive] brilliant. I cried. Although I’m disappointed in that end scene (not the acting as Will and Jason are the best) but idk I want Ciara back and Dylan happy #Casualty.”

Another commented: “Well that was brilliant. So many issues addressed and then, right at the end, David and Dylan.

“There’s something in my eye. #Casualty”

Did the scene bring you to tears? Leave us a comment on our Facebook page @EntertainmentDailyFix and let us know what you think!