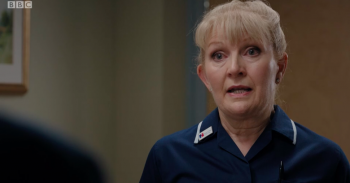 The heartbreaking scenes had viewers sobbing

Casualty viewers have been left in tears as Duffy delivered her devastating news to ex-husband Charlie Fairhead.

Duffy was given the heartbreaking news she has vascular dementia in last night’s episode and had to tell Charlie as her boss at the hospital.

The emotional scenes had viewers sobbing as Duffy tried to remain strong and insist she could still do her job despite the awful disease already causing her problems.

She told him: “As my line manager it’s only fair you know why I was late for work.

“I was seeing a neurologist, he thinks I’m in the early stages of vascular dementia.

“A few months ago I had a couple of falls, I didn’t know why and my GP arranged some tests which were clear.

“Then I started experiencing some problems with my mood and my memory, and my behaviour. I forgot your birthday.

“I had some more tests, then an MRI scan and this morning the neurologist gave me his assessment.”

She added: “Now I think I’m well-enough for work, but I’m being careful to make sure my work remains of a good enough standard.

“Just you and I’ll leave it with you whether Occ health and the rest of the staff should be informed. Now I really should get back to it.”

But Duffy’s emotional response was too much for viewers to cope with and they let their own emotions out.

One wrote: “10 minutes in and I’m already crying. Duffy has vascular dementia #Casualty”

A second said: “Just watched Casualty and my God @cathship27 had me in tears as it’s something that’s so close to home!

“Thank God she’s told Charlie and even though I wanted Charlie to hug her I completely understand why Duffy didn’t!”

A third said: “Literally shed tears at the clip of Duffy aka @cathship27 telling Charlie aka Derek Thompson her Vascular Dementia diagnosis.

“Hit very close to home after my grandad passed away last May from this cruel disease. #Casualty”

Another added: “Duffy, don’t make me cry. I am meant to be wearing super waterproof mascara so it could be a good test for it. #Casualty”

What did you make of the emotional scenes? Leave us a comment on our Facebook page @EntertainmentDailyFix and let us know what you think!