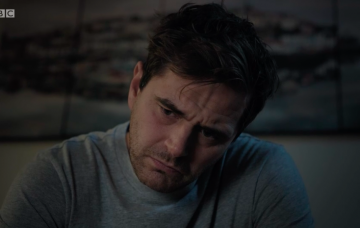 Paramedic Iain was seen setting up to take his own life in the tough to watch scenes, where he packed up his life and prepared to end it all.

The episode began with Iain bagging up all his belongings and preparing his house as if he was moving.

But it soon became clear he was not packing up to move.

After a day at work saying goodbye to his friends and colleagues, Iain took the unusual step of asking his sister Gem to return his spare key before giving her the cash in his wallet and telling her to have a good night in the pub.

As he got home, he sat down and began to write her a note as his plans to end his own life became clear.

It was too much for some viewers who were left heartbroken by the cliffhanger scenes.

A second said: “I am an absolute mess. That episode was so emotional and utterly heartbreaking from start to finish. Powerful performance from Iain 😭😭 #Casualty”

A third said: “#Casualty always catches me off guard. I’ve been annoyed and angry at Iain for weeks. Now I’m crying. This show is an emotional roller coaster and I love it! @BBCCasualty”

A fourth said: “Owwwh 😞 the Iain storyline on @BBCCasualty is breaking my heart 💔 @BBCOne – I had a feeling it was coming for the last 2/3 weeks but to have that cliffhanger.

Another said: “If Iain Dean dies in casualty then I’m going to cry forever. don’t even do this to me, BBC 🤧.”

Another fan heaped praise on actor Mike Stevenson, saying: “@mikeTstevenson Well done on tonight’s Casualty. All the signs of Iain’s suicide were there and it just shows how easy it is to miss them.”