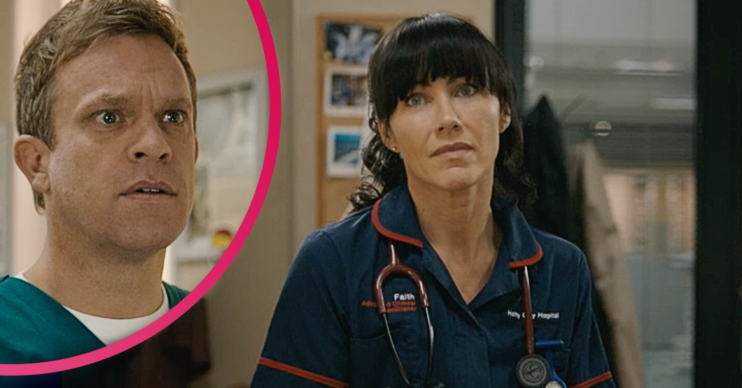 Casualty viewers heartbroken after Dylan and Faith split up again

Is this the end of #daith?

Casualty viewers were heartbroken when Dylan and Faith split up again in last night’s episode.

The pair have been enjoying a secret on-off romance since the start of the year, but now it looks like the end of the road.

And the emotional scenes on Saturday (March 27) broke many viewers’ hearts.

Why have Dylan and Faith grown closer in Casualty?

Faith (Kirsty Mitchell) is married to Lev, but their marriage looks all but over after he cheated on her with another man he met online.

And since her marriage is on the rocks, she’s slowly got closer to Dylan (William Beck).

This culminated in a dramatic storyline when an ambulance the pair were riding in crashed.

Believing she was on borrowed time, she confessed her true feelings for Dylan.

However, their relationship took another turn last night when she had to choose between Dylan and her daughter.

And there was only one winner.

What happened to Faith’s daughter Natalia?

Following her night with Dylan, Faith accidentally pocket-dialled her daughter Natalia, who overheard a conversation between the two loved-up ED practitioners.

Traumatised by the conversation, Natalia went off on a bit of a bender at a funfair.

She took drugs from a stranger and then wandered off on her own.

Not only that, but she lay down on some train tracks, and had to be taken to the ED for treatment.

A horrified Faith had to make an emotional decision and decided to end it with Dylan for the sake of her daughter.

How did viewers react to the emotional scenes?

It wasn’t long before viewers took to Twitter, heartbroken at the pair’s split.

“Faith, we were all rooting for you! May poor Dylan hurt again.”

“That ending,” another said, followed by cry emojis.

“I want to see Faith and Dylan together and also Connie in that last episode. I love her.”

A third commented: “So many feels in #Casualty.

“First proper episode with Natalia and I’m not a fan. Faith, you were right by kids first. Dylan, love ya but the ego there.