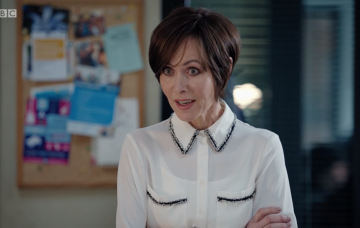 Last night’s episode of Casualty left one doctor hovering between life and death after a brutal assault – so who attacked Connie Beauchamp?

The attack came after a long day for Connie, after she butted heads with staff over who should be prioritised.

She also lost a patient in surgery, failing to save Louise’s friend Ernest.

After a confrontation with Ernest’s daughter Lilley – who blamed Connie for his death – the doctor was attacked.

A mystery assailant pushed the doctor down the stairs, continuing to kick her after she’d fallen.

Shocked fans took to twitter over the episode, desperate to know whether the doctor would survive the attack – and praising actress Amanda Mealing for her performance.

Omg @BBCCasualty I was not expecting that. Connie CAN’T leave she’s the best in the show and an inspiration to women! Pls say you’re not leaving the show @meamandamealing 😭😭😭 #bbccasualty

@meamandamealing @BBCCasualty Oh my gosh, poor Connie! 😭 Superb performance as always. Can’t bear to wait a whole week to find out what happens…🥺

If @BBCCasualty kill off @meamandamealing I will cry, and it will not be pretty 😭 My nerves are in shreds after tonight’s episode!

So is Connie all right? And who is her attacker? Amanda gave some hints, in an interview with Metro Online.

While the attack looked pretty serious, Amanda suggested it wouldn’t be enough to keep Connie down for long.

“Connie has been attacked quite brutally downstairs and repeatedly kicked,” she said.

But she went on to confirm that she’d be back on her feet quickly, saying: “She has a day off, and then she’s called back in.”

Amanda also confirmed that we’ll have to wait a while before we learn who the attacker was, saying the attacker would be an “unknown assailant until episode 33.”

But based on the attack, it seems likely the doctor was attacked by someone she knew – someone angry enough to carefully stalk her until she was alone.

Amanda claimed filming the scene was difficult – saying it left her with a bump on the head. Speaking to What’s On TV she said she had to do without protective gear for one of the shots.

“To get the close up of Connie’s head hitting the floor, the padding had to be taken away and I really did bash my head for real,” she said.

She also hinted that while Connie might be back on her feet quickly, her emotional recovery would take much longer.

“This is a catalyst for post-traumatic stress disorder in Connie,” she said.

“The attack happens once, but Connie ends up living it much longer.”

Who do you think attacked Connie? Leave us a comment on our Facebook page @EntertainmentDailyFix and let us know.