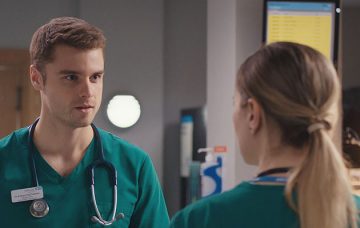 Casualty SPOILER: Scary encounter between Alicia and her rapist Eddie

Alicia is left feeling afraid after a confrontation...

Alicia Munroe is left shaken and scared after a confrontation with her rapist Eddie McAllister.

In this week’s Casualty (Saturday 21 July), junior doctor Eddie faces up to Alicia about her noticeably snappy behaviour towards him at work…

Last month, viewers were horrified when Alicia went on a night out with her colleague Eddie only for the evening to end with a disturbing encounter.

Eddie coaxed the drunk nurse back to his house and the pair had sex.

However, Alicia did not give consent for Eddie to sleep with her and has been struggling in the aftermath of the sexual assault.

Meanwhile, Eddie is continuing as normal and doesn’t realise he has done anything wrong.

Last week, a tormented Alicia finally confided in new housemate Bea, who advised Alicia to seek proper help as well as report Eddie to the police.

This weekend, Eddie confronts Alicia about her behaviour towards him, and it’s an encounter that leaves her frightened explains actress Chelsea Halfpenny.

On an interview with What’s On TV, she says: “Alicia’s going through every emotion from ‘I can ignore this’ to ‘I need to tell someone’. She has loads of self-doubt, which isn’t helped by the fact Eddie’s acting as if nothing’s happened.

“This scares her and makes her think ‘Did this actually happen, or have I made it up?'”

She adds: “In any contact Alicia has with Eddie, she’s distant and quite sharp with him, which really irks him. In his mind he thinks they were a bit drunk, doesn’t really remember what happened and that she’s being weird and embarrassed because they’re workmates.”

Elsewhere in the dramatic episode, new paramedic Ruby interferes in a patient’s personal life, while a father and son are brought in with injuries they refuse to explain, raising suspicions of abuse…

Do you think Alicia should report Eddie to the police? Leave us a comment on our Facebook page @EntertainmentDailyFix and let us know what you think!