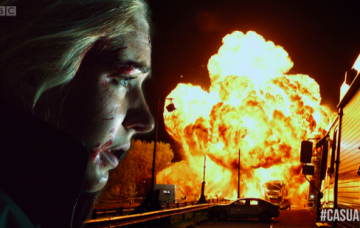 Casualty SPOILER: The BBC drama’s “biggest episode yet” is coming!

The paramedic crew of Holby ED face their darkest day…

Casualty fans are in for a dramatic rollercoaster ride in the coming months, it has been revealed.

The BBC medical drama has promised some of the most dramatic scenes EVER to be aired on Saturday 11 August.

And we’ve cancelled all plans for the evening!

The long-standing series, in its 22nd year, will be screening one of its biggest episodes in the show’s history, which will leave lives hanging in the balance.

Earlier this year, we reported that the current series will end with a shock explosion that could kill off at least one main character.

And now Casualty have given us another hint, as they’ve unveiled a new trailer on their official Twitter account.

Sharing it with their 395,000 followers, they teased: “A New Era of #Casualty is coming…

“On Saturday 11th August, we will be premiering one of our biggest episodes yet! The paramedic crew of Holby ED face their darkest day… Watch this space for more!”

Fans were quick to speculate, with one lamenting: “Omg I still haven’t got over jeff’ s death!”

Another warned: “I swear if Dylan dies I’m gonna come down there and scream at everyone in very high decibels.”

A third stated: “So who is being killed off now? Bring back Zoe and Lilly!!!”

Omg I still haven't got over jeff' s death!

So who is being killed off now? Bring back Zoe and Lilly!!! @sarker @MissCrystalYu

“Ooo can you top the helicopter crash episode thou?” questioned another.

One cynical TV fan suggested whoever is “killed off, will appear in Strictly shortly after”.

With further information under wraps for now, fans will just have to wait and see who is caught up in the devastating incident.

And, more importantly, whether or not they make it out alive.

Will you be tuning in to the dramatic Casualty episode? Leave us a comment on our Facebook page @EntertainmentDailyFix and let us know what you think!