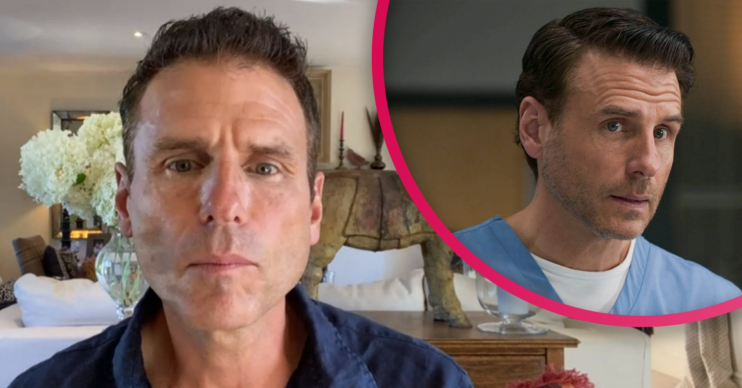 The soap focuses on David's mental health struggles this weekend

In tomorrow night’s episode of the BBC hospital drama, staff nurse David Hide will struggle to manage his symptoms after coming face-to-face with the doctor who sectioned him.

Casualty to focus on David

Speaking to hist Christine Lampard, Jason said: “It’s a brilliantly written episode and David is a joy to play.

“He’s an incredibly complex man and this will bee a combination of so many things in his life.

Read more: Terrified Laura Tobin freaks out on GMB as herd of cows circles her

“What we examine is the minute by minute struggle that David has on a daily basis just managing his condition as he tries to find his normal – well, what everyone else would regard as normal.

“It’s exhausting for him just getting up every day and coping with everything he has to cope with.”

Although his struggle is painful, David does not open up to his wife Rose – and the lack of honesty begins to take its toll on their relationship.

The actor continued: “What I’ve learnt over the last five years investigating bipolar is that people with bipolar – obviously medication and counselling helps and the support of friends and family is incredibly important – but when it comes down to it, it’s the individual’s coping strategy.

“With David, it’s his routine that gets him through the day.

“If that in any way gets messed around with, he’s not sure whether he can cope – and he’s never sure can he tell Rosa those things.

“He’s terrified of opening up to her for the simple reason that he thinks she might leave him.

“It’s terribly sad but it makes great drama. It’s tragic but uplifting at the same time.”

Jason went on to admit that portraying bipolar accurately is incredibly important to him.

“It’s a huge responsibility,” he added. “I need to make sure I do my research and everything I can to get it right.”

As his storyline has played out on-screen, viewers have been in touch with the actor to give him their feedback.

“The most gratifying thing is when you get the reaction from people on Twitter and Facebook from people with bipolar saying thank you for portraying it so accurately,” Jason continued.

“It’s very humbling for me seeing people with both bipolar to say such lovely things but also people who don’t have bipolar but now have a better understanding of what it’s like for people with it.”

During lockdown, while fans have been loving Casualty, Jason’s iconic 90s series heartbeat has won over a new generation of fans.

“I had an amazing time on Heartbeat filming and had fantastic actors to work,” he added. “It was a massive show for ITV and hugely popular.

“What’s great is this whole new generation of people seeing it – they love the 60s music and costumes.

“People will come up to me on the street and say how much they love Heartbeat and they always mention the music and the cars.”

Casualty is on BBC One, Saturdays at 8.4opm.