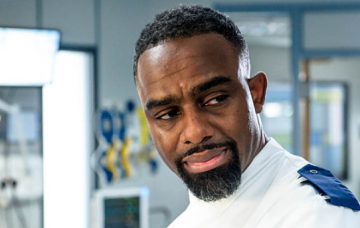 She popped up as Jacob's mum

Viewers couldn’t believe their eyes when a familiar face popped up on the latest episode of Casualty.

But maybe those fans who took to Twitter to express their delight at seeing an EastEnders favourite should book themselves an optician’s appointment – because their eyes were deceiving them.

Charles, 45, is an EastEnders veteran himself, having played Ray Dixon, the father of Bianca Butcher’s son Morgan in Albert Square.

Read more here: EastEnders legend returns – will she get a spin-off series?

Initial impressions of Omo seem to suggest she will prove to be a tough matriarch – just like the character of Claudette Hubbard that Ellen, 62, played in Walford.

And even though they were mistaken, those fans were clearly delighted to see one of the soap’s much-loved characters turn up in another of their favourite shows.

“Hello Yolande,” said one, adding a friendly wave emoji and the hashtag ‘Casualty’ to her tweet.

Another viewer typed: “It’s Yolande! #EastEnders #Casualty @BBCCasualty. I loved her with Patrick.”

A third, adding a gif of a man peering through binoculars, said: “Is that Yolande from EastEnders?”

The answer, of course, was no – even though Omo’s hair was styled short and similar to Yolande’s.

Angela, 64, has actually appeared in Casualty before in an episode from September 2012 – and that time she was identified correctly on Twitter!

LOOOL Is that Yolande from Eastenders on Casualty?

So Yolande ducked Patrick to be in Casualty now loool

Casualty airs next Saturday at 8.35pm on BBC One after Strictly Come Dancing.