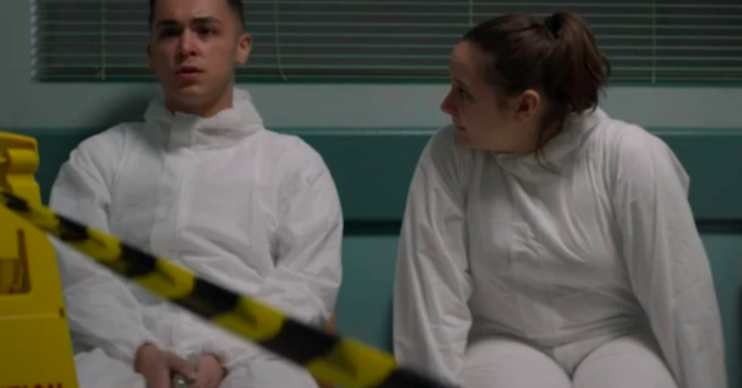 They just scrapped an entire episode

Casualty viewers were confused last night when the BBC skipped an episode it called “inappropriate”.

Fans had been expecting to watch a gripping episode culminating with a showdown between Ethan and Will – but instead it was replaced by a catch-up and the following week’s episode.

The extended preview at the start was designed to fill in the gaps on what fans would’ve seen in the axed episode.

A voiceover announcer said: “The episode we were due to watch tonight, filmed before the spread of COVID-19, was considered inappropriate to show at the moment.

“But never fear, everything we need to know from that episode is in a catch-up right at the start of the programme.”

However glimpses of the episode from the preview showed characters dressed in full protective gear, suggesting an epidemic style storyline.

Such a plot would too closely mirror real life events with the current pandemic.

But that didn’t stop fans being confused about what was going on.

And they were still desperate to see the missing episode.

One said: “Really, really disappointed at the missing episode of #Casualty, especially when it’s so pivotal to current storylines.

A second said: “#casualty I would have liked to have seen that episode.”

A third said: “I really wanted to see the episode that they skipped #Casualty.”

When will Casualty resume filming?

Speaking at an Edinburgh TV Festival online Q&A, he said: “We do have to abide by the rules and while social distancing is in place it is going to be difficult.

Read more: EastEnders, Casualty and Holby City are ‘not quite’ ready to resume production

“There are ways of cheating, actors being close enough together to interact in a scene.”

He added: “We’re not quite at that point yet.

“But all of those conversation are being had and there is a real determination to get that show back up and running.”

What do you think of the BBC pulling the episode? Leave us a comment on our Facebook page @EntertainmentDailyFix and let us know what you think!