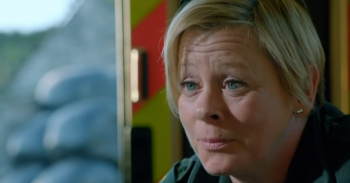 Paramedic Dixie is making her way back to Casualty in episodes set to tie in with Iain Dean’s exit.

Dixie left in 2016 after 10 years at the ED to become part of the HEMS (Helicopter Emergency Services) team.

But the show has confirmed on their Twitter account that she will return in a few weeks time.

She’s back! The ED welcome back a familiar face in a few weeks.
Does everyone remember who this is?#Casualty pic.twitter.com/n1AEbhAYdb

It’s thought Dixie’s return will prompt Iain to reassess his life and think about his own career decisions, paving the way for him to take a break from the soap.

Actor Michael Stevenson announced his departure in May saying at the time: “With huge sadness but immense pride, I have decided to take a break from this amazing show.

“Playing the role of Iain Dean has been a pure pleasure over the past six years, and I have nothing but fine and fond memories.

“I have laughed every day and wish to thank everyone involved at Casualty for making my time here unforgettable.

“Thank you to the fans of the show for being so supportive of Iain throughout his mental illness storyline.”

He went on to confirm he would be back at some point and show bosses insisted the door would be left open for his return.

Speaking about reprising the role of Dixie, Jane said:

“It was really great to see some familiar faces again and of course to hang out with Sir Michael Stevenson… despite the fact that his jokes haven’t got any better!”

Simon Harper, executive producer for Casualty and Holby City, added: “It’s wonderful to have the brilliant Jane Hazlegrove back in the Casualty family fold.”

Jane’s currently appearing in Corrie and has divided viewers over her chavvy, loudmouth character.

Some called her the “new Cilla Battersby” and said they loved her.

But others said she was “awful” and “disgusting”, claiming her to be a “nasty piece of work” that the show didn’t need.

Bernie pitched up after hearing Gemma talk about being pregnant with quads on the radio.

She immediately offended Chesney by calling him ‘Chutney’ and accusing him of being possessive.

She then revealed she was broke and homeless and Chesney agreed she could stay at his – where she then set about seducing him.

Next week, she will steal Gemma’s urine to sell positive pregnancy tests online.