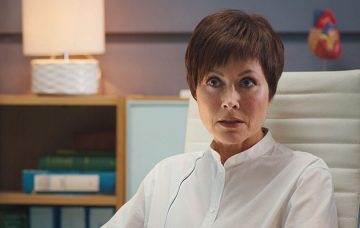 Amanda Mealing stunned BBC viewers when she unveiled an eye-popping transformation at the National Lottery Awards this week.

The actress, 51, attended the red carpet award ceremony on Wednesday (26 September) and left her Casualty character Connie Beauchamp totally in the shade.

The actress, who has portrayed Connie in the BBC medical drama since 2004, presented an award at the event which was hosted by Strictly winner Ore Oduba.

Arriving on stage in a beautiful glittering Vivienne Westwood dress, Amanda was composed as she addressed the audience of heroes and celebrities.

But it was her flowing grey tresses that really surprised those who are more used to seeing her with Connie’s short brunette style.

In fact, Amanda looked barely recognisable from her usually uptight character for which she wears a wig.

A breast cancer survivor, Amanda told the audience: “It’s encouraging news that more and more people are surviving a breast cancer diagnosis in 2018.

“Many assume that once the medical treatment has finished, you’re fine. But, I can tell you first hand, that this is often when the emotional and psychological battle begins.

“That is why the BECCA app from Breast Cancer Care is tonight’s National Lottery Health winner.”

Amanda was diagnosed with cancer in 2002, shortly after giving birth to her second son, and went on to have a mastectomy, chemotherapy and radiotherapy.

She later posed topless to show off her scars, and then had breast reconstruction using a skin graft from her stomach.

Understandably proud of how she looks now, Amanda shared a photo of the night with her 22,400 Instagram followers.

Messin’ in the dressing room. #NLAwards

And they were quick to show their appreciation, with one writing: “Oh my gosh!! I DROPPED MY PHONE WHEN I SAW THIS one inspiration right there!!!”

Another typed: “You look sensational Amanda!! I hope you had a fantastic night. Xx.”

While many others labelled her “queen”, “incredible” and “stunning”.

Yep, it’s official , we have a serious crush!

That's it for the #NLAwards 2018! Thank you for watching with us and remember, none of these amazing stories and projects would be possible without @TNLUK players who raise £30m each week for 1000s of projects across the UK!#NationalLottery pic.twitter.com/i54l8FgoA6

What do you think of Amanda Mealing’s off-duty look? Leave us a comment on our Facebook page @EntertainmentDailyFix and let us know what you think!