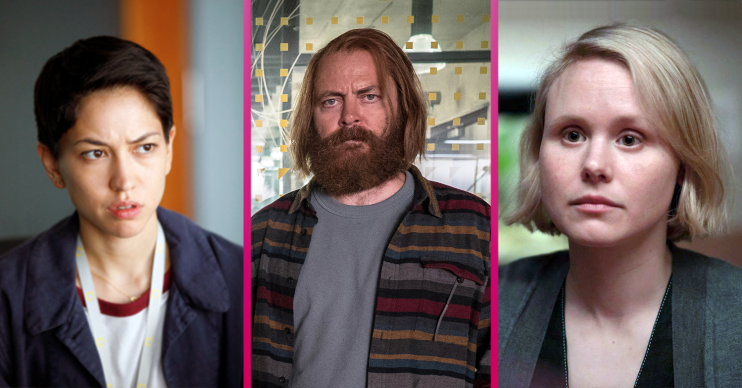 The BBC2 series is a disturbing watch

In fact, you’ll probably recognise a few of the faces bringing Alex Garland’s work to life.

But who plays who exactly? Let’s meet the Devs cast.

The gifted computer scientist is heartbroken after being told her boyfriend took his own life.

But she soon realises all isn’t as it seems.

Sonoya previously teamed up with writer Alex Garland before on his Netflix film Annihilation.

His character is grieving the loss of his daughter which results in him becoming obsessed with dangerous new technologies.

You may recognise Nick’s voice as he is the voice over artist in Bob’s Burgers for Clem, Pete and Cooper.

He was also the voice of MetalBeard in The Lego Movie and Gavin in Ice Age.

The couple were in a serious relationship and even lived together before she dumped him and moved on with Sergei.

She also then proceeded to move Sergei into the apartment they once shared. Ouch.

But that doesn’t stop Lily from turning to Jamie, another computer genius, when Sergei is killed.

Zach takes on the role of Kenton – the man who murders Sergei.

He’s a dangerous guy who has killed before and certainly isn’t afraid to do so again.

With that in mind, Lily had better be careful of this guy – although that may be hard as they work in the same building.

Zach will undoubtedly look familiar as he’s previously starred in the hit TV series Deadwood and The Good Wife.

He was also in the movie Fight Club alongside Brad Pitt.

Katie is a top computer scientist at Amaya who is dedicated to helping Forest uncover the mysteries of the universe.

It’s set to be a busy year for actress Alison as she also takes on the role of Dr. Agnes Jurati in 2020 TV series Star Trek: Picard.

Fans may also recognise her from American Horror Story, Milk and The Family.

Sergei is brutally murdered in episode one of Devs.

Unfortunately, he’s not on our screens for very but his death is at the centre of the Devs storyline.

Although he plays a Russian Spy in Devs, Karl is actually an American born in New York – yes, the accent is fake.

The US star is best known for playing Lou in Nocturnal Animals and Dean in The Neon Demon.

Have you been watching Devs? Leave us a comment on our Facebook page @EntertainmentDailyFix and let us know what you think of this story.