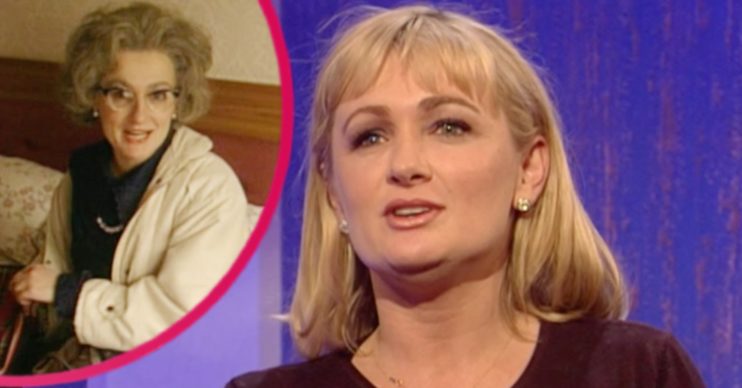 The comedian sadly passed away in 2016

Caroline Aherne at the BBC viewers were left in tears last night (March 9), as they looked back at the life and work of the “comedy genius”.

The writer and performer, who was best known for her role in The Royle Family, sadly passed away in 2016.

During the special documentary, Cold Feet star John Thomson paid tribute with a series of Caroline’s career highlights at the BBC.

Caroline Aherne at the BBC: What happened?

Opening the programme, John said: “I was one of the very fortunate ones that got to work with Caroline for many years.

“As well as being a friend, she was without a doubt one of Britain’s finest talents.”

She was without a doubt one of Britain’s finest talents

The show went on to feature snippets of her most famous work.

These included The Royle Family, The Mrs Merton Show, The Fast Show and Quick Step Back In Time.

Furthermore, Caroline was remembered in a series of interviews.

Caroline Aherne at the BBC: How did viewers react?

The special episode left viewers in tears as they remembered the actress’ incredible work.

Taking to Twitter, one said: “#CarolineAherne a true queen of comedy. Like many other geniuses she had her demons but we can remember all the brilliant shows she was part of. Extremely funny but plenty of sadness and tears. Brilliant.”

A second added: “How this wonderfully warm naturally funny lady is missed #CarolineAherne. It was amazing to hear her voice and see Mrs Merton at her very best!

“She was truly a one off! #TheRoyleFamily is a work of art a tapestry woven with cleverly created much loved characters. Comedy with a soul.”

Read more: Caroline Aherne at the BBC: The heartbreaking reason she died alone

In addition, a third wrote: “So heart-warming and brilliant of the BBC to finally put on something of pure genius. Caroline Aherene, amazing and missed by all who love subtle, beautiful and clever comedy, an absolutely stunning individual.”

A fourth said: “Watching the Caroline Aherne tribute on BBC, so good. #CarolineAherne.”

Meanwhile, another wished the special episode was longer.

Read more: Who played Nana in The Royle Family? What else was Liz Smith in?

The TV star wrote: “I loved Caroline Aherne. Watching this tribute on BBC1 is bringing back so many wonderful memories of her genius. #carolineaherneatthebbc.”

When did Caroline die?

Caroline died following a battle with lung cancer in 2016.

She publicly revealed she was battling lung cancer in 2014 at the Macmillan Cancer ­Improvement Partnership.

However, she later refused to put her nearest and dearest through the torment she suffered.

When the cancer returned, she only told a handful of her closest friends.