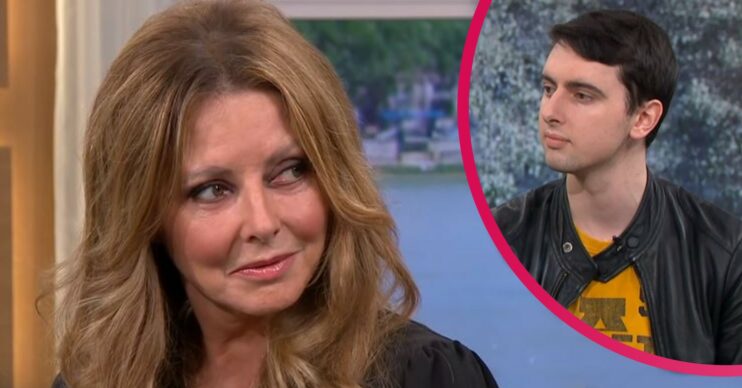 Carol and Cameron opened up about his special educational needs

Carol Vorderman has revealed she was told her son Cameron was “unteachable” by teachers as she opened up about his special education needs.

Cameron made his TV debut on Wednesday’s This Morning alongside his famous mum.

Carol Vorderman on This Morning with son

The TV star explained that teachers had told her that Cameron was “unteachable” and they “couldn’t have him here” when he was a young child.

However, Carol later found a specialist school – which costs £11,000 a term – for Cameron and he had to do three rounds of tests to get in.

But host Phillip Schofield pointed out that not all parents in the same situation could afford to pay for the school.

Carol said: “Now I, we, want to try and help and do something about that and start a campaign or something.”

Despite his educational struggles, Cameron revealed he has finished his Masters degree in animation.

He said: “Now I’ve got my first job which I’ll be starting next week. I’m super excited to start that.

“I never thought I’d get this far.”

Carol went on to speak about the bullying Cameron faced as a teenager, saying: “The bullying was awful.

“One thing I would love to say to parents is it’s a long road.”

What did Carol say on This Morning?

Cameron added: “If I had the option to go back in time and change my school life I wouldn’t because it just taught me so much about life and how to deal with all of it.”

Carol looked visibly moved as she watched her son speak.

Viewers watching praised Cameron as “inspirational” and also Carol for raising awareness on the topic.

One person said on Twitter: “Well done Cameron you are a credit to your mother!!!”

Another added: “I think Cameron is amazing and what he has achieved.”

A third said: “Just watching @carolvorders and her son on #ThisMorning thank you for being a voice that may finally be heard in our fight for a fitting education for our children and your son is fabulous and so inspirational!”

One tweeted: “@carolvorders just watched you on This Morning the pride on your face was so great to see and congratulations to Cameron on his job.”