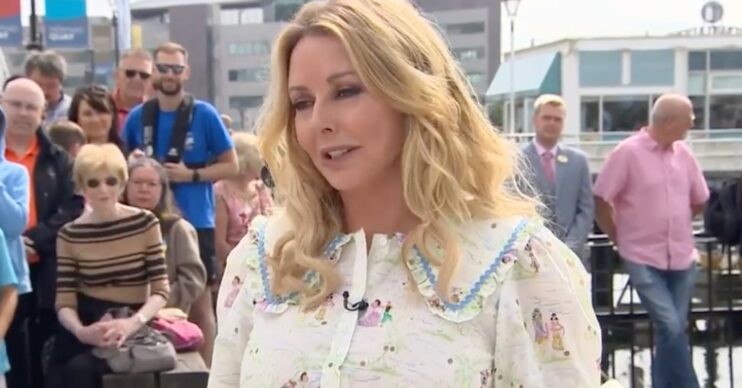 Carol bravely opened up on This Morning

Carol Vorderman’s menopause led to her falling into a “deep depression” that left her feeling “suicidal”.

The former Countdown star made the heartbreaking confession on This Morning today (Wednesday, July 27).

Carol on This Morning today

During today’s edition of This Morning, Josie Gibson and Craig Doyle caught up with the show’s Menopause Bus.

The This Morning menopause bus is touring the country at the moment to spread awareness about the menopause.

Today, the bus was in Cardiff Bay – and Welsh star Carol Vorderman was there too.

“I’m nearly 62, I’ve been through all of this,’ she told Dr Phillipa Kaye.

“I’ve been through the years where we were shamed into thinking we were crazy because we had menopausal symptoms.”

The 61-year-old then continued, saying: “Well I started in my early fifties, I didn’t have night sweats or flushes or anything. I started feeling anxious, I’ve never felt anxious in my life.”

She continued, saying: “I started feeling anxious about what trousers I was going to wear, whether I was going to have tea or coffee, you know, all sorts of things.”

Carol then said that this developed into a “deep depression”.

“That developed into a deep depression, I felt suicidal at times,” she said.

“What saved me was that I kept a note of when my period arrived through an electronic calendar and that helped.”

Carol Vorderman opens up about menopause

The former Countdown star then continued, saying she started on a “bespoke HRT”.

“Within 48 hours I felt back to normal and I have never had a symptom since, it is wonderful,” she said.

She then encouraged women to come and visit the menopause bus that day in Cardiff.

“We all go through it, there is nothing to be ashamed about,” she said.

“There is nothing to feel like you’re going crazy about, you are not going crazy, it is simply a hormone change,” she added.