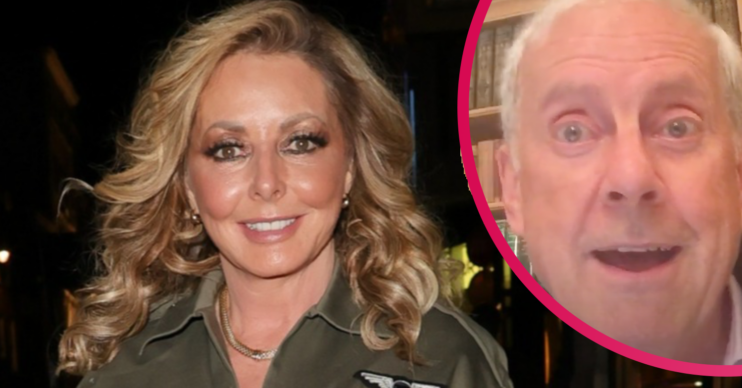 Carol Vorderman has announced on Instagram that she is returning to Channel 4 to appear on one of her favourite TV programmes.

The former Countdown brain-box revealed her career news to her army of 226,000 Instagram followers.

Earlier this week, Carol had teased her TV project in a post about returning to work.

Carol, 61, had wrote on her social channel: “On my way to work… can’t wait to tell you what it is… Next week…

“This bird has decided to get back into work instead of hiding away for the last however many years…yup…expect trouble.”

The teaser sent fans into a frenzy.

One wrote: “Oooh on your way back to the Countdown studio? Have a terrific time wherever you’re going.”

Another said: “Love to see you hosting Countdown.”

But they were wrong about her returning to TV to appear on the show that rocketed her stardom.

Carol has now revealed she will be joining  the cast of Celebrity Googlebox – and she’s bringing a friend along for the ride.

Carol wrote: “So I’m making my debut this Friday at 9pm on one of my favourite shows of all time and joining the @c4gogglebox gang…with my friend of 40 years @gylesbrandreth.”

After filming their first episode Gyles tweeted: “A hot night in my house…

“@carolvorders has popped round to watch the box with me, we’re having fun, and lots of it!”

Who else will appear on Celebrity Gogglebox?

A host of stars are taking part in series 4 of the hit TV show.

The show returned on June 10 and isn’t short of household names.

Rylan Clark and his mum Linda also make a return.

Martin Kemp and his son Roman and Spice Girl Melanie Chisholm and her racing driver brother Paul will also appear on Celebrity Gogglebox.

What do you think of the Celebrity Gogglebox viewers? Let us know over on our Facebook page @entertainmentdailyfix.