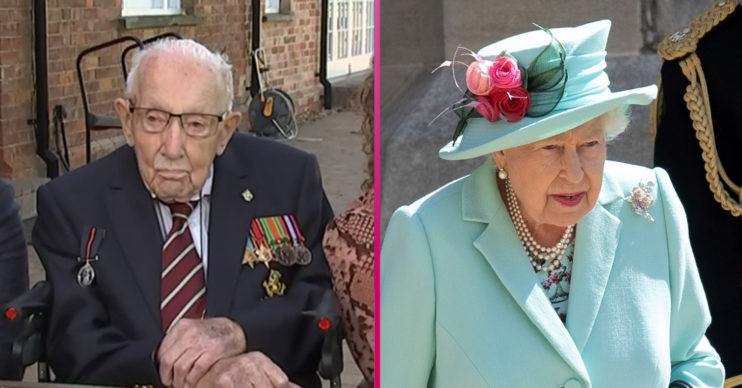 Captain Sir Tom Moore has revealed the moment he received a knighthood from the Queen.

The army veteran, 100, was knighted at Windsor Castle on Friday (July 17) after raising more than £32million for the NHS.

He met Her Majesty, 94, face-to-face but maintained social distancing amid the coronavirus pandemic.

Captain Tom appeared on Monday’s Good Morning Britain to speak about his knighthood.

He said: “I’ve never ever had such a time in all my life as to be there speaking to the Queen, who’s such a delightful person.

“She was absolutely marvellous. When she tapped me on the shoulder with her sword, which had been her father’s, she did it so gently.

“She was the kindest person you could ever wish to meet.”

He continued: “She looked round at all of us as a family and said, ‘You’ve done so well.’

“It was an absolute pleasure and honour to be able to speak to the Queen so close.

“We had to keep our distance of course, but we managed very well to have a little conversation, just to say it was a delightful time for me.”

Revealing why he wants to remain ‘Captain Tom Moore’ and not ‘Captain Sir Tom Moore’, he said: “Never ever did I anticipate so many weeks ago that I would be anything like that.

“I must say it sounds rather nice.. Captain Sir Tom Moore, and I am enjoying it, but I’m still Tom Moore and to the outside world I’m still Captain Tom.”

Meanwhile, last week, Captain Tom said it was a “huge honour” to be get knighted and meeting the Queen.

A tweet on his official account shared the message: “I could never have imagined this would happen to me. It is such a huge honour and I am very much looking forward to meeting Her Majesty The Queen.

“It is going to be the most special of days for me.”

It was an absolute pleasure and honour to be able to speak to the Queen so close.

Other investitures were reportedly due to take place at Buckingham Palace, in London, and the Royal Family’s Palace of Holyroodhouse, in Edinburgh, in June and July.