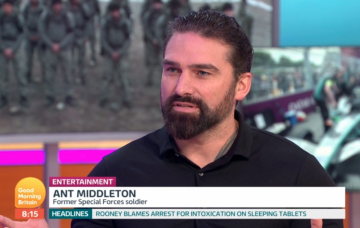 Would a spell in the military 'sort out' millennials?

SAS Who Dares Wins TV star Ant Middleton believes young Brits have lost their way when it comes to discipline and respect – inspiring fans to call for national service to be introduced.

The Channel 4 hunk appeared on Good Morning Britain earlier today to discuss his latest TV series and whether it is appropriate for women to serve in the special forces.

“Women might be mentally strong, but in the special forces you have to be physically strong,” he was heard saying in a voiceover before host Piers Morgan questioned whether the elite military squad should suffer from “dilution” just for the sake of “ticking boxes”.

“That was my concern – this being a political exercise rather than [a look at] the dynamics of the organisation,” agreed Ant.

“It is not about passing or failing a course, it is about the years and years of commitment and training these men and women go through to get on the course.”

Following presenter Susanna Reid’s claim women lack “brute strength in the moment” in comparison to men, Ant also agreed with Piers that separate gender-specific fighting forces might be a better solution than admitting women to the SAS.

“Let’s go down that route first of all,” he proposed.

Ant continued: “But, definitely, women are strong. Especially on the course. They’re strong, they’ve got determination, they’ve got guts – just like any of us.”

After touching on the recent ‘snowflake’ recruitment campaign from the Ministry of Defence, Piers expanded his ponderings beyond the military as he wondered whether people – particular millennials – are being wrapped up in cotton wool.

Insisting “mental strength” and “mental resilience” is on the wane, Piers suggested Ant might be a suitable mentor to go into schools and teach young people about building character.

“The basic life skills are being lost in translation,” Ant concurred, before listing them.

“That’s discipline, that’s structure, that’s manners, that’s respect, that’s accountability. All of those key components that I had as a child made me the man I am today.”

He continued: “The world has flipped a bit but I think we’re pulling that back slowly.”

Both Piers’ and Ant’s words struck a chord with some viewers, who backed plans to instil such values through military participation.

“Totally agree with Piers that our youth need more structure and need toughening up,” tweeted one fan.

The viewer continued: “Ant is spot on as well. No respect these days from youth. All kids should enrol into Army/Sea/Air cadets. They’ll learn respect there!”

Another added: “Lovely and very sensible man on re SAS – we need more people like him on our screens.”

However, another viewer said they felt let down that – a few brief interjections from Susanna and comments from one of the show’s participants aside – there was little in the way of input from women into the discussion. Charlotte Hawkins did not speak during the entire segment.

“It is disappointing to see the two female presenters sitting quietly while Piers dictates and debates with Ant,” they noted.