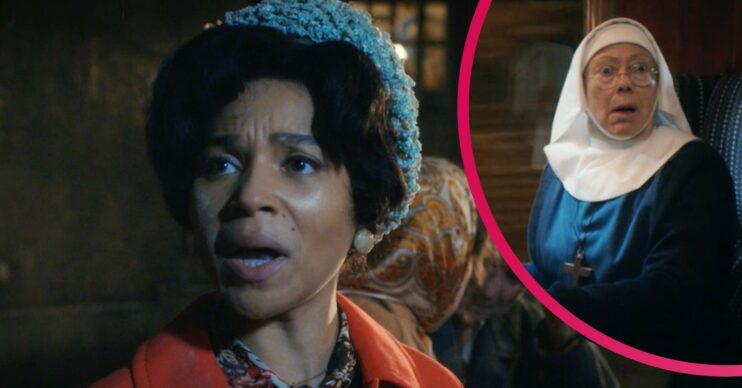 Call the Midwife: Do Sister Julienne and Dr. Turner die?

It's not looking good for them!

Sister Julienne and Dr. Turner were involved in a train crash in the latest episode, and now fans are worried about their fate.

What happened on Call the Midwife last night?

Last night’s episode of Call the Midwife ended in tragedy as Sister Julienne and Doctor Turner were involved in a train crash.

It wasn’t as if this disaster hadn’t been hinted at either. In last Sunday’s episode (February 6), Sister Monica Joan went to see a clairvoyant after a raven appeared in Nonnatus House.

Dulcie, the clairvoyant, foresaw “something unfortunate” happening, but didn’t say what. Viewers know now, though.

The driver of the train, Lionel Corbett, had some sort of an episode and lost control of the train, causing it to pick up speed and crash.

Nurse Corrigan, who was in the toilet at the time of the crash, escaped relatively unharmed, however, Doctor Turner and Sister Julienne’s fates are unknown.

What did viewers say about Call the Midwife’s train crash ending?

Viewers were left stunned by the ending of last night’s episode. The potential death of two characters who had been on the show since Call the Midwife launched in 2012 was too much for some.

“How am I supposed to think about anything other than #CallTheMidwife for the next week?” one viewer asked.

“Oh God, watching that #CallTheMidwife come together – Mr. Corbett’s headaches, the approaching trip to Chelmsford, the rift opening between Patrick and Tim, & of course the many portents of doom – made that one of the most terrifying episodes they’ve ever done. I’m in bits,” another said.

“I haven’t missed one single episode of #CallTheMidwife since it began like 11 years ago but never have I been as shook by an episode as this evening,” a third tweeted. “How am I gonna cope awaiting episode 8???”

“I AM NOW EXTREMELY STRESSED #CallTheMidwife,” another said.

One said: “OMG! That was horrific!”

What else was said about the Call of Midwife train crash?

Many viewers were worried about Dr. Turner’s fate, not just for his sake, but for Shelagh’s sake too.

“I’ve spent the last 10 years worshipping Turnadette, it cannot end like this and I can’t wait a WEEK to find out…,” one fan of the couple tweeted.

“Nope. Dr. Turner can’t die. He and Tim have to go into practice together, and he has to grow old with Shelagh telling him off about sneaking a crafty pie. And what will Poplar do without the best GP in London?” another desperate viewer said.

Read more: Call the Midwife star Judy Parfitt on the pain of losing her husband to dementia

“Think that’s the most dramatic #CallTheMidwife episode I’ve ever seen,” a third wrote.

“DOCTOR TURNER BETTER BE OK I AM WARNING YOU,” another said.

It’s going to be a long wait until the series finale next Sunday for fans of Call the Midwife!

Call the Midwife returns on Sunday, February 20 at 8pm on BBC One and BBC iPlayer.

What do you think will happen next week? Leave us a comment on our Facebook page @EntertainmentDailyFix and let us know.