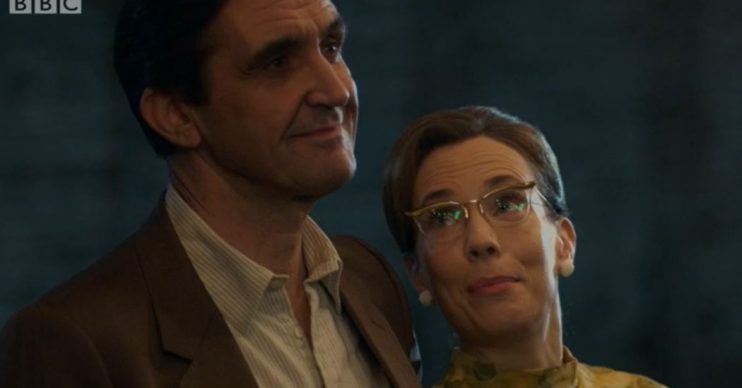 Fans of Call The Midwife were feeling emotional last night after a ‘beautiful’ moment between Dr Patrick Turner and his wife, nurse Shelagh.

During Sunday’s (February 2 2020) instalment, the couple were treated to a date night and went to see The Sound Of Music at the cinema.

Throughout the episode, Dr Turner had struggled to make time for his wife outside of their busy work schedule, so it was a welcome break for the two of them.

And after seeing the film, they couldn’t help but compare their own marriage to the on-screen relationship between governess Maria, played by Julie Andrews in the 1965 classic, and retired naval officer Captain Georg von Trapp (played by Christopher Plummer).

Shelagh said: “I feel as if our love is as solid as theirs, even if we don’t sing about it.”

But Patrick recalled a moment he was touched by Shelagh’s singing, as he told her: “Your voice touched my soul. It was like everyone else had melted away and it was just you.

“And if I truly was like Captain von Trapp, I would seek out some edelweiss and surprise you.”

Shelagh told him it wasn’t likely he would be able to find some edelweiss like in the film The Sound of Music, as it grows in the mountains of Austria.

I cannot cope with how adorable they are.

But at the end of the episode, Shelagh was surprised to find a bunch of white flowers waiting for her at work.

“Small and white, clean and bright. They were the nearest thing to edelweiss I could find,” Dr Turner said, with a smile.

Another tweeted: “I was OK until Patrick bought the flowers and then the happy tears flowed. Brilliant episode #CalltheMidwife.”

A third wrote, along with several crying emojis: “Patrick and Shelagh. I cannot cope with how adorable they are #CallTheMidwife.”

I was ok until Patrick bought the flowers and then the happy tears flowed. Brilliant episode #CalltheMidwife

Someone else said: “Patrick, Shelagh and the nearest thing to edelweiss. There’s something in my eye! #callthemidwife.”

“I was in a mess over #CallTheMidwife,” said a fifth, adding: “Between Patrick and Shelagh and Sister Julienne I was in bits.”

“What another stunning episode of #CallTheMidwife,” said another. “A truly heartwarming episode. And seeing Patrick and Shelagh’s relationship go from strength to strength is just beautiful.”

Patrick, Sheilagh and the nearest thing to eidelweiss. There’s something in my eye! #callthemidwife

What did you think of last night’s episode? Leave us a commment on our Facebook page @EntertainmentDailyFix and let us know.