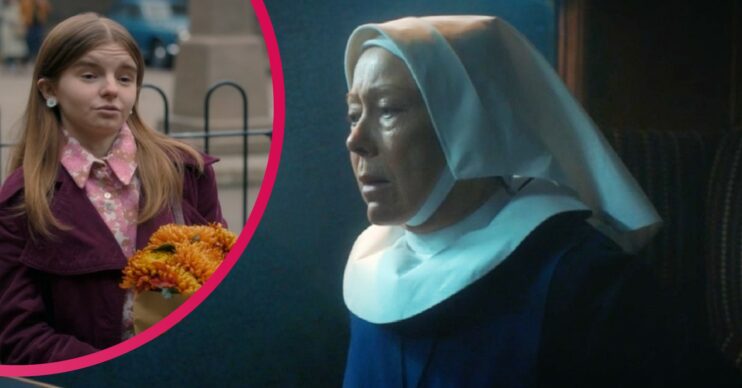 Call the Midwife viewers insist ‘stressful’ finale was ‘too much’

It was an emotional one!

Call the Midwife 2022 viewers insisted the emotional season finale last night was “too much”.

Fans learned the fate of two beloved characters following last week’s shocking cliffhanger, and it was too much for some.

What happened on Call the Midwife last night?

The pair were involved in a train crash, and viewers were devastated at the possibility of losing two long-running characters.

However, in yesterday’s episode it was revealed that the duo had survived, but not without consequence.

Dr. Turner walked away from the crash with just a bump on the head, however, there was cause for concern for Sister Julienne.

The nurse suffered a chest injury which mimiced a heart attack, however, she too was alive at the end of the episode.

It didn’t end well for all though. Carole Reece gave birth to a stillborn baby, and Edina was widowed following the death of her husband, the train driver.

What did viewers say about Call the Midwife?

Viewers of the show were over the moon to learn that Sister Julienne and Dr. Turner had survived.

But many said the scenes were “too much” and “stressful”.

One person said: “I can’t cope with Call the Midwife it’s all too much for me!”

Another wrote: “Oh this is too much for a Sunday evening #CallTheMidwife.”

A third added: “Good Lord now I know why I don’t watch #CallTheMidwife. It’s too much.”

Meanwhile, others branded it “stressful” as one said: “Most stressful hour of my life.”

Another tweeted: “That was the most stressful episode of #CallTheMidwife.”

What else did viewers say about the show?

The final episode of the hit BBC series was too much for some teary-eyed viewers to handle. Some confessed that the series finale had had them in tears.

“#CallTheMidwife was as beautiful and as heart wrenching as it always is. The way the show touches on life and loss and everything in between is just amazing. I will be crying myself to sleep though,” one said.

“Sad in parts but a lovely ending to the series. Thank you #CallTheMidwife but again for delightful Sunday night viewing. Can’t wait for next series,” another said.

“Every episode never disappoints! I was so worried that Dr Turner or Sister Julienne would pass away. I cried and smiled throughout that episode! What a season finale,” a third said.

“Thank you so much for another amazing series, I’m really going to miss the warmth and compassion that #CalltheMidwife brings each week,” another wrote.

Call the Midwife will return at Christmas on BBC One and BBC iPlayer.

What did you think of the Call the Midwife series finale? Leave us a comment on our Facebook page @EntertainmentDailyFix.