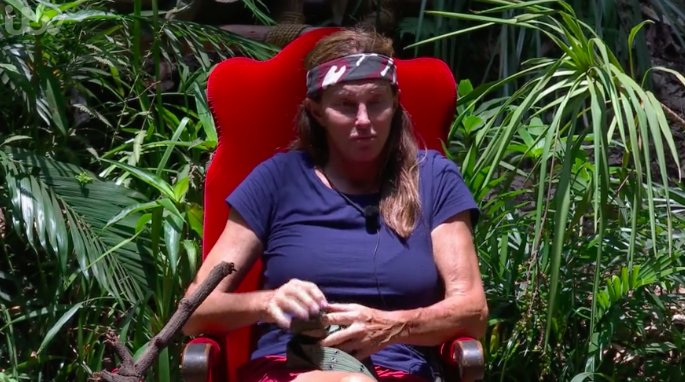 Caitlyn Jenner is the new camp leader on I’m A Celebrity . . . Get Me Out of Here!

She seemed very pleased with her new role.

Caitlyn Jenner has become the new camp leader on I’m A Celebrity… Get Me Out of Here!

The 70-year-old reality star was voted by viewers of the ITV reality show to take over from former rugby star James Haskell as the leader of the camp during Wednesday’s (27.11.19) episode, with Coronation

Sitting in the special red throne reserved for camp leader, Caitlyn said: “I really feel good up here, I really feel a sense of power.”

The star’s first task was to team up with Andy to give each celebrity a new role within the camp, shaking up the previously allocated roles which had been decided by James and his deputy Jacqueline Jossa.

Caitlyn and Andy allocated cooking chores to Ian Wright and Kate Garraway, cleaning to Roman Kemp and Nadine Coyle, washing up to Myles Stephenson and Jacqueline, water duty to James and Adele Roberts,

and camp gas to Cliff Parisi and Andrew Maxwell.

Speaking about the new jobs, Roman said in the Bush Telegraph: “Kate and Ian bicker at the best of times, I can’t wait to see them arguing over who is going to fillet the fish and chop the veg.”

Elsewhere in the episode, the Bush Tucker Trial was completed by James and Ian, who dubbed themselves “Team Raskell” as they headed to the trial clearing to take part in Deadly Dungeon.

The trial saw the pair enter a pitch black dungeon made up of several rooms and tunnels, where they would have to locate the 12 stars to win meals for camp.

Read More: I’m A Celebrity: Andrew Maxwell accuses Ian Wright of singling him out as they clash again

James and Ian were shackled together for the trial, and after missing half the possible stars for the trial, the pair ran out time after gathering just six stars, and therefore six meals for camp.

Viewers are absolutely thrilled that Caitlyn has become leader of the camp.