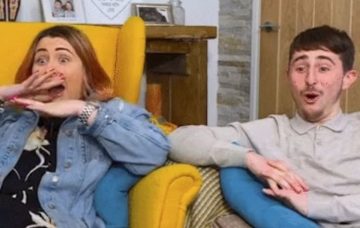 It was a struggle holding our dinner down...

Stars of the Channel 4 show Gogglebox have been subjected to some pretty gruesome TV over the years, but even they were shocked by what was put in front of them last night.

The programme in question was an episode of long-running Channel 5 documentary series The Yorkshire Vet.

Now, you’d think that a show set in the former practice of All Creatures Great And Small writer James Herriot would make for gentle, inoffensive viewing.

However, the Gogglebox gang – and viewers at home – were left cowering behind their hands as the programme showed a bull being coaxed into producing a SPERM SAMPLE.

Gogglebox doesn’t start until after the 9pm watershed, but anyone who’d treated themselves to a mid-evening takeaway probably wished they hadn’t as Lawrence the bull was tested for fertility.

This involved the hefty creature having a device inserted into his bottom in order to prompt an ejaculation.

If that sounds grim, that’ll be because it was. And with the Goggleboxers trying not to retch, viewers took to social media in their droves.

One gasped: “Omg #Gogglebox MY EYES. I want to cry. I didn’t want to see a bull’s penis or it ejaculating in a cup.”

Read more: Scarlett Moffatt fails to recognise her OWN boyfriend

Another added: “OMG!! Look at that poor bull’s face!! Oh the humility!!”

And a third joked: “I hope I don’t get reincarnated as an infertile bull.”

The 53-year-old, who appeared on the Channel 4 show between 2013 and 2016, and who’s also appeared on Celebrity Big Brother, is to become a film star!

She told the Daily Star: “I’m working on a movie. I can’t say much about it at this stage, but everyone will know more about it next month.

“I’ve never had any acting experience, so this is me coming out of my comfort zone. I’m determined to show that although I’m funny, I can also act. I can do everything!

“I’m serious about what I do. If I want to achieve my goals, then it’s not always about fun. I want to show another side of me.”

Did you watch The Yorkshire Vet? What did you think? Leave us a comment on our Facebook page @EntertainmentDailyFix!