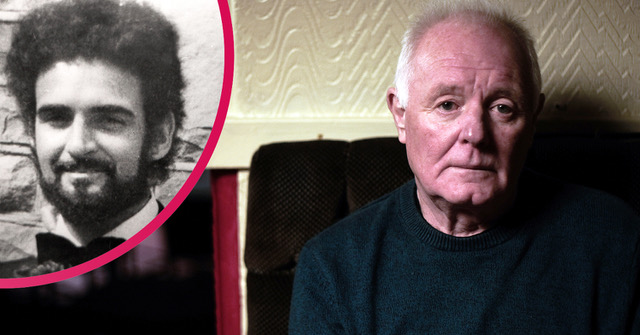 In October 1977, when the Les Battersby actor was 24, he found 20-year-old sex worker Jean Jordan on an allotment in Manchester – and briefly ended up as a suspect for the psychotic slaying.

The former soap actor recalls: “There was two of us, me and an older bloke. We had the chance to get an allotment, which we did.”

“We managed to acquire this big shed but it needed a brick base.

“I went to get the brick base and it’s on the way there – five times I’d gone, filled the barrow and come back. On the sixth time I came across this body.

“My mate came running up, he couldn’t look at it, he just had to… he started being ill.

“The next minute, I’d never seen so many police cars. They asked me if I’d ever been to Yorkshire.

“I couldn’t remember if I’d been to Yorkshire or not. Where was I in Manchester on such and such a date?

“I didn’t know. Why I had a hammer and chisel in my wheelbarrow.

“That was to break the bricks up I needed for the base of the shed.

“Your mind does play tricks on you. ‘Where was I?’ You know?

“In the end they came in and [told me], ‘Get dressed and we’ll run you home.’

Following the biggest and most expensive ever manhunt in the UK, Peter Sutcliffe was eventually apprehended and charged with the murder of 13 women – including Jean – and the attempted murder of a further seven victims.

In another chilling interview, which aired on Channel 5 earlier this month, Bruce added that he actually saw Sutcliffe.

“I was looking at Jean and there was this face in the bushes – black hair, black beard and black eyes.” he told The Ripper Speaks.

“I looked him straight in the eyes.”

And in Netflix documentary The Ripper, Bruce went into even more harrowing detail about the awful discovery.

He said: Her [Jean’s] hair was burnt off. Her face was smashed in. Her breasts were cut off. She was… She was disemboweled.

“She… she was cut in the most horrendous ways a person could cut someone.”

In March 2007, Bruce was suspended from the soap after he got drunk with an undercover reporter from the News of the World, made inappropriate comments and revealed upcoming storylines.

In May that year the soap confirmed he would not be returning and would remain on suspension until his contract ended in September.

Les didn’t have a proper exit storyline and Bruce hopes that one day he will be able to make a cobbles comeback.

Who was the Yorkshire Ripper and what did he do?

The north of England was terrorised between 1975 and 198o as a serial killer preyed on women across Yorkshire and Greater Manchester.

He was dubbed the Yorkshire Ripper because of the similarities to Jack The Ripper’s notorious crimes – the victims were mostly prostitutes and horrifically mutilated.

Sutcliffe chillingly said of his killing spree: “I had the urge to kill any woman. The urge inside me to kill girls was now practically uncontrollable.”

Sutcliffe was given 20 life terms in 1981 for murdering 13 women and trying to kill seven more in a spree between 1975 and 1980 across Yorkshire and Greater Manchester.

What is The Yorkshire Ripper: The Secret Murders about?

Two-parter The Yorkshire Ripper: The Secret Murders questions whether Sutcliffe was responsible for another 2o unsolved murders.

The series examines more than 20 unsolved murders and attempted murders and places these events within the timeline of Sutcliffe’s confirmed crimes and MO.

It asks why he has never been considered a suspect.

The first episode presents evidence to show that his campaign of murder and mutilation may have started at least six years before his first acknowledged victim.

Among the cases explored in this episode are Judith Roberts, a schoolgirl killed in Staffordshire in 1972, and Carol Wilkinson, a bakery worker murdered in Bradford in 1977.

Despite the clear similarities with Sutcliffe’s MO, two innocent men – Andrew Evans and Anthony Steel – were convicted of these murders.

The second episode recalls how pressure continued to build on West Yorkshire Police as they stepped up the hunt for the killer dubbed the Yorkshire Ripper.

As well as the crimes that police decided to include in the Ripper investigation, other murders and attempted murders with a clear link to the killer were discarded and left unsolved.

At the height of the investigation, a series of mysterious letters and tapes were received by the senior detectives. The investigation was derailed even further, allowing the Ripper to go on killing.

Meanwhile a third innocent man was sent to prison for life.

What happened to Andrew Evans?

Evans was a 17-year-old soldier when serving at Whittington barracks just outside Lichfield in June 1972 when the body of 14-year-old schoolgirl Judith Roberts was found some six miles away.

He was convicted through answers obtained using a so-called truth drug, Brietal – now discredited for inducing false memories – in the absence of scientific or eyewitness evidence.

He spent 25 years in jail before being freed by appeal court judges in 1997.

Under the rules of evidence at that time, Evans’ confession would have been inadmissible, and there were also doubts raised about psychiatric evidence.

What happened to Anthony Steel?

Anthony Steele was convicted of the murder of Carol Wilkinson who was attacked, sexually assaulted, and killed on her way to work in the morning.

He was arrested 18 months after the murder after police believed he had taken a key ring from the murder victim.

And, during his fifth interview, the 22-year-old made a written statement confessing to the murder.

After his sixth interview he saw a solicitor and retracted his confession. Police conducted a further interview against Anthony’s solicitors instructions.

Anthony was sentenced to life in prison in 1977. He was released on licence in 1998 before his conviction was quashed 2003. Fresh psychological reports revealed that he had an IQ of 65.

They concluded that he was educationally ‘retarded’ and abnormally suggestible. And particularly vulnerable after 36 hours of interviews.

As such the conviction was deemed unsafe.

Anthony Steel received an official police apology and around £100,000 in compensation from the government.

The Yorkshire Ripper: The Secret Murders is available to watch on ITV Hub.