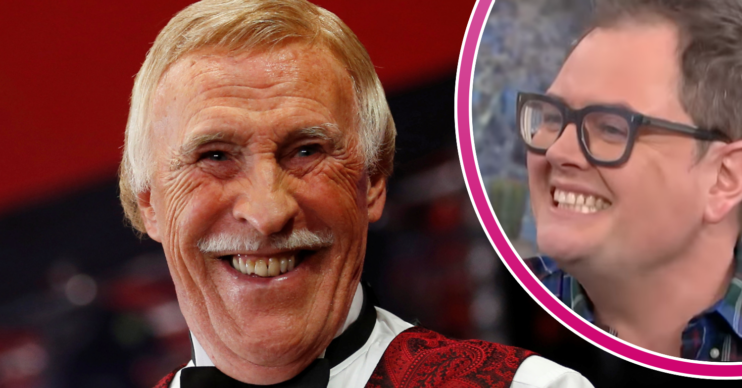 His legacy lives on

Strictly legend Sir Bruce Forsyth spoke heartbreaking words ahead of his death which continue to give his beloved widow comfort.

The TV presenter and gameshow host was known for his gregarious smile and charisma.

Bruce’s best-loved shows included the Generation Game, Play Your Cards Right – revived by Alan Carr on his Epic Gameshow tonight (August 6) – and The Price is Right.

The icon was known for catchphrases such as “nice to see you, to see you nice”, as well.

Just look for the rainbow, my darling.

He then presented Strictly Come Dancing, but stepped down from the role in 2014.

Later he was quoted as saying the years of TV work had “taken their toll”.

Sir Bruce was born in Middlesex, but lived in Edmonton, north London, with his third wife.

In 2015 he removed himself from the public eye and underwent a heart op later that year.

During 2017, he spent weeks in hospital with bronchial pneumonia.

His wife of 34 years, Wilnelia, revealed what her husband had said during his final days.

Dad-of-six Sir Bruce was given palliative care after pleading with doctors to be allowed to die at home.

The national treasure also made a promise to his wife to help guide her after his death.

Lady Wilnelia told the Mirror: “I remember saying to him: ‘But Bruce, how will I know what to do when you’re not here? I can’t even work the TV remote without you!’

“He turned to me and said: ‘Just look for the rainbow, my darling.’

“Now his children send me pictures of rainbows from wherever they are and it’s really just this wonderful feeling.”

Alan Carr returned to host Epic Gameshow in May.

Celebrities and members of the public compete – with three of the shows being Bruce’s.

Alan recently revealed Sir Bruce Forsyth’s prediction that his Chatty Man series would be a hit.

Will you be tuning in? Let us know what you think about Epic Gameshow on our Facebook page @EntertainmentDailyFix