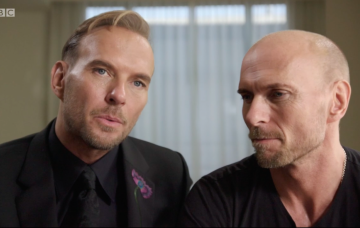 Bros set to ‘make a TV return with follow up documentary’

Can it live up to the last one?

Look out, everyone – Bros look set to make a sensational return to our TV screens!

The pop-star brothers, Matt and Luke Goss, were last seen on UK telly over Christmas, when their documentary After The Screaming Stops aired on BBC Four.

It became something of a cult phenomenon, with several of the duo’s one-liners from the programme going viral.

And it sounds like the Beeb are planning to take advantage of this unexpected success – according to reports, they’ve signed the boys up to do a SECOND fly-on-the-wall show.

A source told The Mirror: “Matt and Luke are returning in July for a string of gigs in Brixton, and filming will begin there.

“It will almost be like a TV reality show this time, exploring how they were perceived before the previous documentary, how they were vilified and then how they became an overnight sensation.”

After The Screaming Stops followed Matt and Luke, 50, as they prepared for a reunion show at London’s O2 Arena last summer.

The twins, who enjoyed a string of hits in the Eighties, including When Will I Be Famous? and I Owe You Nothing, made some heartfelt observations about life during the 37-minute programme.

And although it attracted less than 250,000 viewers when it was first aired, word quickly spread that there were some gems amongst those comments.

At one point in the show, Matt said: “The letters H. O. M. E. are so important because they personify the word ‘home’.”

And speaking of the brothers’ childhood, he mused: “We had one toy that we loved more than anything and that was a dart. We didn’t have a dartboard that went along with it. We had a dart.”

Luke Goss, who has enjoyed a successful film career alongside the band’s musical comings and goings, originally seemed angered by the reaction to the documentary.

He told The Times Weekend: “There is a contingent who like a freak show. They will always take the [bleep].

“But if that’s their contribution to the universe then I pity them. I’m kinda sick of being ridiculed. I focus on the good people out there.”

Matt and Luke had the last laugh, though, as the programme has gone on to win a number of awards.

We can’t wait to see it!