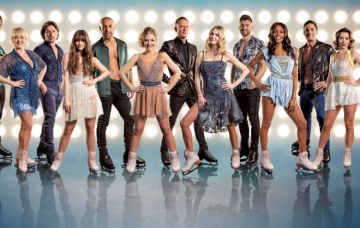 Coronation Street actress Brooke Vincent has shared an honest post on Instagram about her fears leading up to her big Dancing on Ice debut.

The 25-year-old uploaded a video of her larking about with her pro skate partner Matej Silecky along with a lengthy message about the realities of training and preparing for such a challenging show.

“So here is is I’ve waited 9 long months to get me to this point,” she wrote.

“I’ve sat and worried, I’ve analysed everything, I’ve pictured every situation I could possibly be in.

“I’ve made up a couple of go to dance moves JUST IN CASE I mess up,” she admitted.

Brooke’s War-and-Peace length comment also revealed that she has ‘got frustrated’ with her dance partner, and even endured physical damage to her body from her gruelling skating regime.

“I’ve thought about if I fall over I’m just going to lie there and play dead (so don’t worry).

“I’ve over thought everything, panicked, cried, got frustrated with my partner, fell over, not slept has countless amounts of bruises, wondered about the “ifs and buts” but never once thought of backing out or told myself don’t do it,” she wrote.

Brooke went on to say that all her friends and family had “constantly” told her to go out and do “scary things”, and that were always right behind her in her endeavours.

“I just want to say before I start this crazy thing called Dancing On Ice, thank you to everyone around me for always encouraging me to better myself and to keep pushing myself…

“And even if sometimes I actually think I can’t do it.. thinking of everyone that’s said I can keeps me going,” she penned.

The Corrie actress has also spoken out about how joining the show has already resulted in some huge lifestyle changes, telling Metro she has given up smoking and cut down on booze ahead of her training.

“I’ve stopped smoking for the show so I’m not out of breath when they are telling me I’m getting scores of nine and ten! I’ve come on a journey with my fitness, not really drank, have been eating well, training and it’s been a lifestyle change for me,” she revealed.

“Dedicating this time to myself and to my body, it’s just a mega challenge for myself so I’d like to come away from it with some self-satisfaction, saying well done and patting myself on the back,” she said.

Dancing on Ice starts next Sunday on ITV at 6pm.