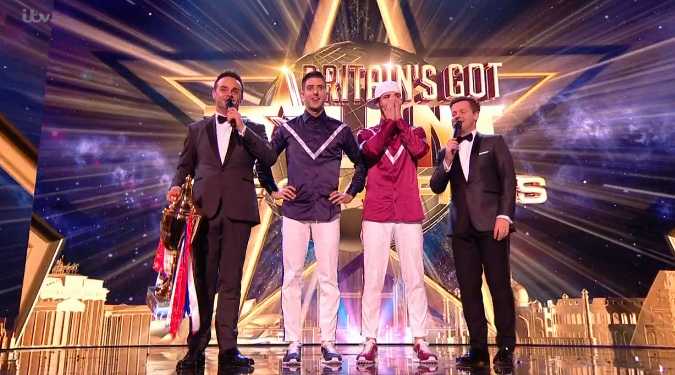 Britain’s Got Talent: The Champions fans divided as Twist and Pulse crowned winners

It was between them and Stavros Flatley

Fans of Britain’s Got Talent: The Champions have been left divided as the winners of the show were crowned.

At the end of the pre-recorded final, hosts Ant and Dec announced the top three acts as voted for by the audience of BGT ‘superfans’.

Ukranian sand artist Kseniya Simonova, and dance acts Twist and Pulse and Stavros Flatley were called up to stand next to Ant and Dec and await the reveal of the winner.

Kseniya Simonova was called out in third place, and then Twist and Pulse were revealed as the winners.

The boys were overwhelmed as they accepted their trophy.

Glen said: “I am absolutely speechless. I can’t thank you guys enough. I’m holding back everything right now.”

Whilst Ashley added: “I literally feel amazing. Things like this don’t happen to me and my best friend Glen. Thank you so much, this means the world to us.”

Some viewers at home were thrilled, saying the lads had worked hard and really deserved it.

I wish I could dance 💃 like Twist and Pulse! They were my favourite I’m glad they won 🏆#BGTChampions

so happy twist and pulse won, they are such an iconic act!!! but wish the dogs were in the top 3, they deserved better #BGTChampions

Omg well done @TwistandPulse a had a sneaky feeling it could of been you, especially Simon’s comment for me stood out #outsiders congrats 💃🏼👬🎊🎉🏆#BGTChampions

Yes @TwistandPulse so well deserved. Would very much enjoy watching them live. Very talented and very funny! You were my favourites #BGTChampions #BGTTheChampions #BGT @BGT #TwistAndPulse

Others were fuming and thought German act Alexa and her dogs should have taken home the prize.

They called out the voting system and one even suggested it was ‘fixed’ for Twist and Pulse to win.

How this act did not win , or even come in top three! Just shows how stupid and ridiculous and unbelievable, this voting system is!! #BritainsGotTalent #BGTChampions pic.twitter.com/ZfTbMkAxw3

#BGTChampions I think if the public had voted n not just a random group who were given #free tickets that would have been a very #Different #result.

#BGTChampions really 🙄😱🙄😱 there were more talented ppl on that stage than twist n pulse! 🙈 #whatawasteofsaturdayswatchingthis 🙄🙄🙄

The public should have voted.

The brilliant dog act should have won 🐶🐕🐩🐶🐕🐩 #BGTChampions

The winners were not the best . The dog act or the sand woman should have won #BGTChampions

#BGTTheChampions Wow 😯 I’m bewildered that Twist & Pulse won BGT The Champions, I had Stavros Flatley to win it would have been fitting to a great career between them both @BGT #BGTChampions

#BGTChampions What a joke, who are these stupid Superfans. Voting crazy throughout and how the dog act didn’t win tonight is ridiculous.

Read more: I’m A Celebrity…Get Me Out Of Here! gets UK theme park

Earlier, fans had expressed their fury that the final isn’t live and they didn’t get to vote for their winner.

And the winner may have been very different if the public had their say given two acts brought viewers at home to tears.