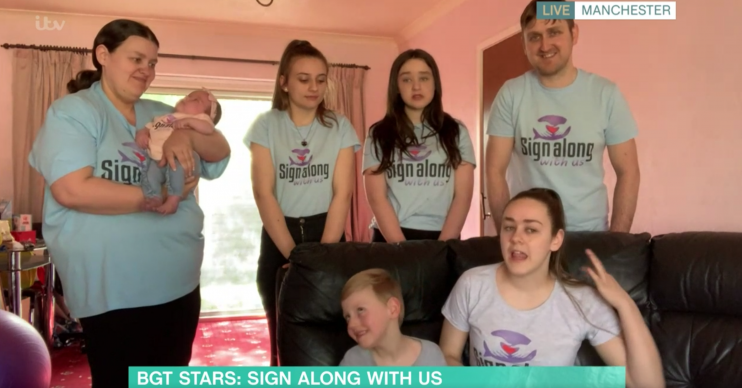 Jade Kilduff told the real story behind forming her choir

Britain’s Got Talent kicked off the show at the weekend by making viewers and also the judges alike break down in tears over act Sign Along With Us.

And now Jade Kilduff and her brother Christian have managed to do the same again as they appeared on This Morning.

The real reason Jade started Sign Along With Us

Jade, 18, started the group to help her brother, Christian because they were told he would never be able to communicate.

In fact, the family had already been on This Morning last year, but it was their performance with the choir on Saturday’s Britain’s Got Talent that really melted viewers’ hearts.

Read more: Who Wants To Be A Millionaire fans amused by Chaser’s appearance

Today’s hosts Eamonn Holmes and Ruth Langsford were talking to Jade and Christian about why the choir was started. The rest of their family then joined them on screen.

They then performed A Million Dreams from The Greatest Showman, and other members of the group were able to virtually join in.

Jade explained why she began the choir in the first place: “Me and Christian started Sign Along With Us because we were told that Christian would never communicate. I managed to find a way to help him communicate through sign so we wanted to teach the world.

“Especially our friends and family who are around Christian, we wanted them to be able to talk to him.

“Then it just carried on growing and we started teaching fun classes where we learnt songs in sign language to try and get kids involved and all different people, and then that led to us finding our choir and to Britain’s Got Talent.”

As their mum, Diana, dad Neil and three sisters joined them on screen, Diana told how “unbelieveably proud” she is of Jade and Christian as a result of their achievements.

The mum-of-five even shed a tear herself as a result of the song!

And Diana wasn’t the only one as viewers at home were also brought to tears once again.

One even claimed Britain’s Got Talent might as well stop now because the winners have already been found!

Aww! That was so beautiful to watch #thisisus #bgt jade what a great sister you are #thismorning 😀

They’ve done it again… in tears watching @signalongwithus on #ThisMorning. What a wonderful joyous group of people. Also, a reminder of how important video technology can be in bringing people together at a time like this. #BGT

The other acts on #BGT needn’t bother coming back….. We’ve found the winners already #SignAlongWithUs #ThisMorning

Aww I’m in tears watching @EamonnHolmes @RuthieeL with the @bgt stars Sign Along With Us . How amazing are they !! @thismorning #ThisMorning

I’m an emotional wreck,jade you are amazing 🥰 I absolutely love what you’re doing. #SignAlongWithUs #ThisMorning

very emotional watching sign along on #thismorning especially during these crazy times. Great to see everyone sticking together through technology.

Jade’s final words also left a lump in the throat as she described their gang.

“I would describe it as a fully inclusive family, we’re not just a group we’re a group of people who are so supportive of each other all the time.

“It’s a safe place for people who feel like they don’t always fit in, they can be themselves in our group.”

Britain's Got Talent Sign Along With Us This Morning