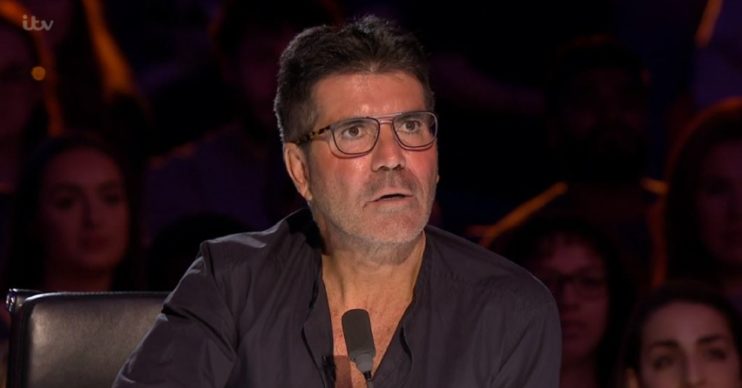 Fans of BGT were left unsettled by Simon Cowell’s signature tonight (Saturday, May 2).

The head honcho of the Britain’s Got Talent panel was asked by act Magical Bones to sign a playing card for part of his magic trick.

Simon did as he was asked, and the magician proceeded to throw the pack of cards in the air and do a backflip before catching Simon’s card.

Read more: Magical Bones was on This Morning

But when Magical Bones showed it to the audience, viewers at home were more interested in what Simon’s signature looked like.

Rather than resembling his name or even his initials it looked surprisingly like a part of the male anatomy!

That’s simon’s signature? I thought it was a dick #BGT

Did Simon just draw a penis on the card? #bgt #BritainsGotTalent

Wait did simon draw a cock on that card #BritainsGotTalent #BGT

The second part of Magical Bones’ trick wowed the judges even more.

He went on to perform an escape artist trick while telling the story of slave Henry Brown.

The magician placed a woman in a box of swords before wrapping a curtain around the box. Once the curtain was pulled back, it was revealed Magical Bones was now in the box.

However, it actually wasn’t him at all, it was another woman altogether! Meanwhile, Magical Bones himself appeared behind Simon.

Viewers were astounded by the trick and insisted he should have got the Golden Buzzer.

In fact, this evening’s Golden Buzzer had been used earlier in the evening by Amanda Holden and it caused controversy.

Amanda had pushed it for mother and daughter singing duo Sammy and Honey after they movingly spoke of Sammy’s battle with cancer.

They were sent off stage halfway through their performance and told to learn another song.

When they returned all of the judges were wowed by them and Amanda gave them the Golden Buzzer.

But many fans felt it was a huge set up.

Viewers have also begged the show to change the format after Sammy and Honey became the fourth singing act to be awarded a Golden Buzzer.

All singing on Britain’s Got Talent

The lack of variety hasn’t gone unnoticed by those watching at home, who think the show needs more unusual acts.

Several have called for singing acts to be banned altogether, with some saying the show is getting increasingly dull and ‘boring’.

Can we stop having so many singing acts on #BGT?! There’s two other talent shows dedicated to just that 🙄🙄

That’s 4 golden buzzers this year that are doing some sort of singing.

You think they’re going to go for 5 out of 5 by the end of auditions? #BritainsGotTalent #BGT

@BGT – never thought I’d say this but it is getting worse and worse episode by episode, series by series. Meant to be BRITAINS GOT TALENT: not singers & dancers every episode! Never known anything so fixed either! @itvstudios time to cull the show?? #BGT

That’s now 4 singers who have the golden buzzer 🙄 great! #BGT

Petition to ban dancers and singers from #BGT, really get boring year after year🤷‍♂️

Also through tonight were a group of dancing turtles, a teenage orchestra who wowed with modern hits, a kids’ choir, and a singing Ariel the mermaid and dancing Sebastian the Lobster, as well as a dancing duo from the Philippines.