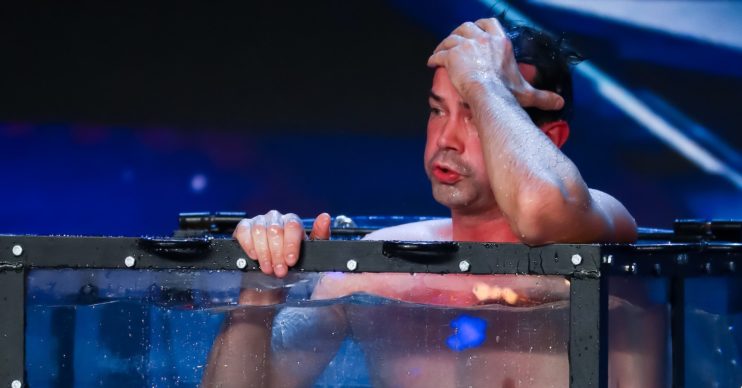 It was one of the most tense acts we've ever seen

Britain’s Got Talent viewers were left reeling last night after a contestant nearly drowned while performing a dangerous stunt on stage.

Escapologist Christian Wedoy attempted to break free from a water-filled container while being chained around the wrists and neck.

However, his act came perilously close to disaster when he failed to emerge after FOUR MINUTES of being underwater.

And though he eventually came through the ordeal, many fans took to social media to vent their displeasure at what had happened.

His life in their hands

Arriving on stage in a dressing gown, Weber, from Norway, had told the judges that legendary escapologist Harry Houdini had managed to complete the stunt in three minutes and 30 seconds.

He then dropped the bombshell that, for him to emerge safely, the judges would first have to select the correct key to open the box.

I find that underwater escape act so unethical.

Weber told the panel: “You will be responsible if I survive or not.”

Simon, visibly shocked, told him: “I am not encouraging you to do it, but I am excited – good luck.”

Read more: BGT viewers claim to know who the winner of 2020 is before the final!

As Wedoy was chained up and lowered into the water, his assistant presented five keys to the judges and demonstrated that only one was able to open the container.

He then proceeded to cut up four of the keys at random, leaving the audience – and Ant and Dec – gasping.

To everyone’s relief, with two minutes having elapsed, David Williams stepped up and managed to open the box with the remaining key.

However, there was still a lot of work for Wedoy to do, and as the clock continued to tick, he seemed unable to unlock the padlocks and chains that were restraining him.

As the audience winced and an ashen-faced Simon beckoned for the backstage team to rescue the stricken performer, he finally emerged from the water with over four minutes on the timer.

It had been an incredibly tense few moments of TV, and for some viewers it was simply too much.

One tweeted: “OMG #BGT that was not entertainment.”

Another said: “I find that underwater escape act so unethical. How is that entertaining?”

And a third scathed: “That escape act was not remotely entertaining. Simon is a sadist.”

The last round of auditions for this year’s Britain’s Got Talent will be aired next Saturday at 7pm on ITV.

The live finals have been pushed back due to the coronavirus, with the rescheduled dates yet to be announced.