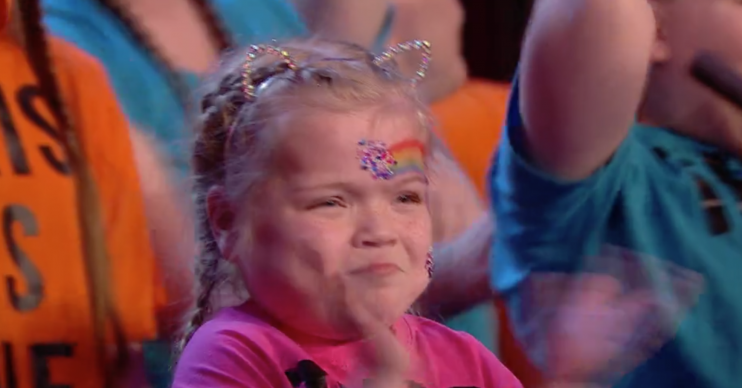 Britain’s Got Talent: David Walliams chooses Sign Along With Us choir as Golden Buzzer act

Amanda Holden and Alesha Dixon cried along with many viewers

Judges and viewers of Britain’s Got Talent alike let the tears flow during this evening’s episode as they watched signing choir Sign Along With Us – and David Walliams chose them for his Golden Buzzer act.

The group was founded after 18-year-old Jade began sign-singing lessons for her little brother, Christian.

He has difficulty verbally communicating and doctors warned he’d never say a word.

Siblings Jade and Christian were familiar to some viewers as they appeared on Lorraine last year after a YouTube video of them performing Lewis Capaldi’s Someone You Loved went viral.

The 65-strong choir sang and signed The Greatest Showman, wearing brightly coloured T-shits with ‘This Is Me’ emblazoned across them.

All four judges were visibly charmed by the inspirational youngsters, but both Amanda Holden and Alesha Dixon were really overcome with emotion and openly wept.

The crowd then roared as David Walliams stood up and hit the Golden Buzzer, as metallic confetti showered down onto the stage.

Meanwhile, Simon Cowell recognised someone in the choir, his friend Ella Chadwick.

The two met at the Pride Of Britain when the 12-year-old was honoured as Child of Courage for her charitable work.

Ella was born with congenital nephrotic syndrome, a rare kidney disease, and has spent much of her life in hospital.

She has had six years of dialysis, 40 operations and suffered several strokes. And despite all this, she never stops smiling.

As Simon walked onto the stage to greet her, Ella showed him a picture she’d drawn for him so that he would never forget her.

The media mogul assured that he would never forget her – and nor will BGT viewers.

Many were delighted for the choir, but Ella especially stole their hearts.

simon and ella have my heart #bgt #BritainsGotTalent

Visit our Facebook Page @EntertainmentDailyFix and let us know what you think about tonight’s show.