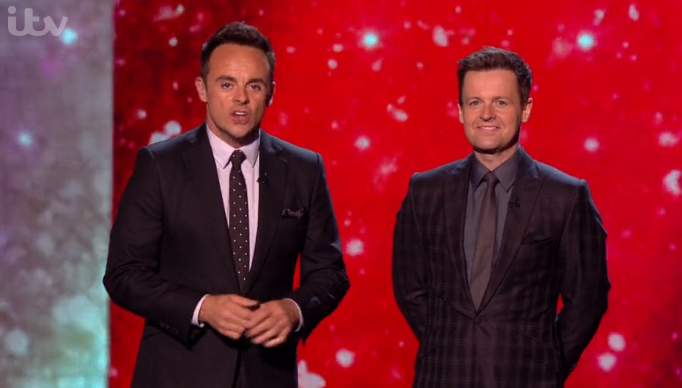 Live shows will be postponed until later in the year

ITV has confirmed Britain’s Got Talent auditions will broadcast in the next few weeks.

It was recently revealed that the programme’s live shows will be postponed amid the coronavirus pandemic.

The talent show – which is hosted by Ant McPartlin and Dec Donnelly – said the live programmes will broadcast “later in the year”.

ITV said in a statement: “The Britain’s Got Talent audition shows are due to be broadcast in the next few weeks as planned.

“We have been working with the brilliant production teams at Thames and Syco to find a way of making the live finals work, which were due to be broadcast at the end of May.

The Britain’s Got Talent audition shows are due to be broadcast in the next few weeks as planned.

The news also follows announcements that fellow ITV show Ant and Dec’s Saturday Night Takeaway would film for the first time without a live studio audience.

The broadcaster would also postpone the upcoming live episodes of The Voice.

Carolyn McCall, ITV’s CEO, said: “This week has seen an escalation in the impact of the coronavirus with the Government ramping up measures and recommendations that are having profound implications for people and organisations across the UK.

“All businesses are being deeply affected and ITV is no exception.

“But as a Public Service Broadcaster we remain committed to doing everything we can to continue to provide news, drama, entertainment and factual programmes to our viewers to keep them informed about this crisis and to offer them an escape from it.”

During a speech to the nation on Monday night (March 23), the Prime Minister Boris Johnson announced a three-week lockdown in the UK to try and battle the virus.

Explaining the four reasons we can only leave home for, he continued: “Shopping, one hour of exercise a day, any medical need or to provide care to elderly and, travel to and from work where absolutely necessary.

“These are the only reasons you should be leaving home.”

It follows news that the death toll in England has reached 335.

Head to our Facebook page @EntertainmentDailyFix and let us know what you think of the new restrictions.