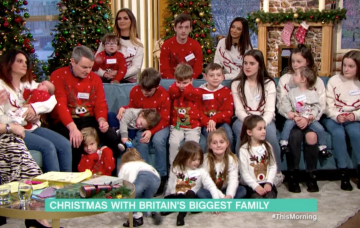 The Radfords, Britain’s biggest family, show off baby No 21

This is DEFINITELY the last one!

Britain’s biggest family have shown off their 21st baby — and vowed to have no more. (Again!)

The entire family squeezed into ITV’s This Morning studio today to talk about their plans for the future, including calling it a day on the baby front and preparing for their biggest ever Christmas.

But as host Ruth Langsford pointed out, the couple made the same pledge the last time they were on the show.

Eamonn Holmes asked: “Are you addicted to having children?”

The dad replied: “I think we just love having the kids and having a big family and welcoming a newborn into our lives.

“We’re not addicted but if it is an addiction, we are giving it up.”

Sue said: “It will be strange to not have a newborn in the house but then we’ll always have lots of grandchildren so it’ll never be a quiet house.”

Bonnie Raye was born in November at 8lb 4oz, and Sue revealed just how fast the birth was.

“She was very quick, she was not hanging around. I think they’ve got my labour down to 12 minutes,” Sue said.

The family are planning Christmas Day with 30 people in their 10-bedroom converted care home.

With so many kids, the cooking falls to Noel, but he said: “We prep a lot the night before on Christmas Eve.

“We’ve got a table we can fit 16 around, we have an island in the kitchen for another six and some double up.”

The Radfords’ weekly food bill is around £300, but they splash out even more at Christmas.

The couple run a bakery and pie shop and claim only child benefit.

They shot to fame on 2012 Channel 4 documentary 15 Kids and Counting.

Do you think they will have any more kids? Leave us a comment on our Facebook page @EntertainmentDailyFix and let us know what you think!