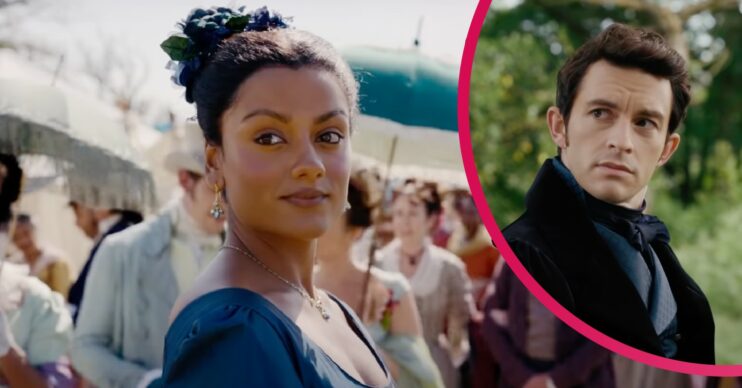 The new series airs on March 25

The trailer for Bridgerton series two was released today (Wednesday, March 8), and fans can hardly contain their excitement!

The second season of the hit Netflix will air on March 25, so fans don’t have much longer to wait.

What happens in the Bridgerton series 2 trailer?

Ever since the season two teaser trailer was released last month, fans of Bridgerton have been desperate for a better look at season two.

The new Bridgerton trailer gives fans a closer look at some of the new characters joining the show – Kate and Edwina Sharma in particular.

Fans are given a glimpse at the beginnings of a love triangle starting to form between Viscount Anthony (Jonathan Bailey), Kate (Simone Ashley), and her half-sister, Edwina (Charithra Chandran).

As Lady Whistledon narrates, anyone who wants to get with Edwina has to win over Kate.

However, it seems from the trailer that Anthony might have more of a connection with Kate than he does with Edwina…

There’s definitely some tension between the pair, with a flustered Kate even admitting at one point she can see how Anthony “might engage a person”.

Anthony looks like he’s going to keep his feelings about Kate to himself and pursue Edwina.

However, Daphne asks a question that makes him begin to rethink that plan of action.

“Has this young lady [Edwina] truly won your heart?” she asks her brother. “The one that makes it impossible for you to look away from them at any given moment?”

It seems the answer is no, as clips speed by of Anthony and Kate sharing looks, moments alone and even the faintest of touches as they walk past each other.

“My honour is hanging by a thread that grows more precarious with every moment in your presence,” Anthony tells Kate at one point.

Towards the end of the trailer, Anthony and Kate can be seen standing close together, staring at each other. Are they about to kiss? Is Anthony going to tell her how he really feels?

Fans are only going to have two wait a few more weeks to find out!

How have fans reacted to the Bridgerton series 2 trailer?

As well as being uploaded to YouTube, the Bridgerton trailer was posted on the official Bridgerton Instagram too.

Hundreds and hundreds of fans have stormed the comments to express their excitement after watching the trailer.

“THIS IS PERFECT I’M SCREAMING,” one fan wrote.

“WHAT KIND OF PERFECTION IS THIS,” another said.

“Oh now THIS is scandalous! Hurry up 25th!” a fifth said.

Will you be tuning in to season two? Tell us on our Facebook page @EntertainmentDailyFix.