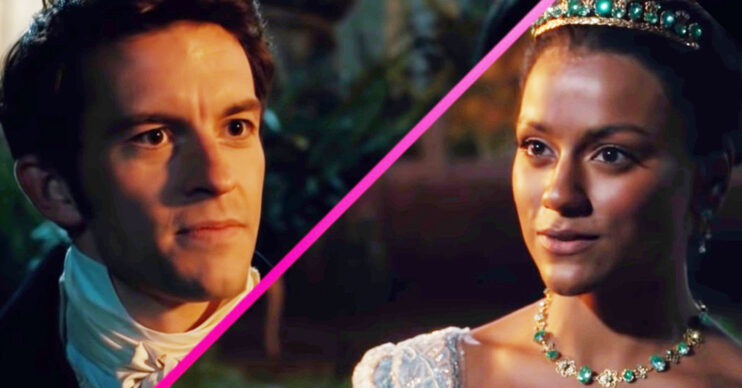 Could this hatred really turn into love?

Anthony Bridgerton has his work cut out for him in Bridgerton season 2 after getting off on the seriously wrong foot with new arrival, Kate.

The show’s new leading man is in search of a wife, and in a first look clip that dropped at Netflix’s TUDUM fan event, he’s not being shy about it.

In fact, it appears the Viscount – who swore off marrying for love in season one – is actually being a bit too rude for his own good when it comes to women.

But Kate (newcomer Simone Ashley) is here to save the day. With the first look clip alone, she completely puts him in his place.

Approaching her outside one of the many Regency parties, Anthony tries his luck and admits he ‘hoped her would meet her again’.

Having none of it, Kate responds: “So you might discern if my wit is acceptable, my manners genteel?”

Anthony, taken aback, accuses her of eavesdropping, realising she’s heard his demands of a woman.

“It was hardly an effort, seeing as you were proclaiming your many requirements for a wife loud enough for the entire party to hear,” she tells him.

Anthony then asks her if she was offended.

“I take issue with any man who sees women merely as chattels and breeding stock,” Kate continues to snap at him.

“Viscount Bridgerton, when you manage to find this paragon of virtue, whatever makes you think she will accept your suit?!”

Done with the conversation, Kate essentially tells him to check his behaviour, before walking back into the party without him.

In the last second, Anthony watches her leave in complete shock.

But judging by his previous love, singer Sienna, we have a feeling Kate’s sassy demeanor is only going to interest Anthony further.

Let his quest to win her around commence.

When will Bridgerton season 2 be released?

Filming continues to be disrupted due to Covid outbreaks on set. During TUDUM, Jonathan said they had just finished the ‘second block’ of filming out of four blocks.

So basically, they’re halfway there.

As a result, it’s likely we can expect the film in the Spring of 2022 at the earliest.

Though with this clip below, our hearts are already burning to find out more…

Bridgerton is available on Netflix now.