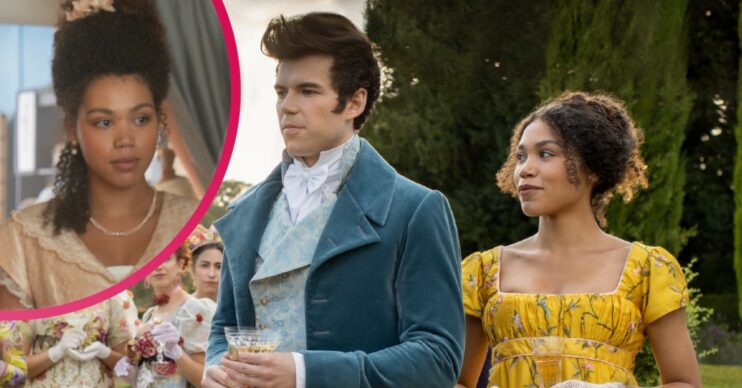 Bridgerton: Where did we leave Marina Thompson in season 1? What’s next for her in season 2?

Will we meet Marina's child in season 2?

Season 2 of Bridgerton drops next month and we can’t wait to see what’s next for fan-favourite Marina Thompson.

After catching the eye of many suitors, Marina started season 1 as the incomparable – the most promising debutant of the season.

However, it all came to end when she became burdened with life-changing news.

So where did we leave Marina Thompson in season 1 and what will she be getting up to next?

Where did we leave Marina Thompson?

Marina Thompson is a distant cousin of the Featheringtons who comes to stay with them so she can enter society and find a suitor.

In order to protect her family from social ruin, Portia Featherington forces Marina to marry immediately.

But Marina is unfazed and claims she already has a man who loves her called George Crane.

Read more: Who is Edmund Bridgerton? Isn’t he supposed to be dead?

George Crane is the father of Marina’s child and she hopes that she can run away with him once he returns from the war.

However, the hopeless romantic receives a heartbreaking letter from George, denying their child.

Marina is devastated and as a last resort she decides to trap Colin Bridgerton into marrying her.

The pair plan to get married in Scotland right away, but their engagement quickly ends when Lady Whistledown reveals her secret.

He explains that George died in the war but he offers to marry her instead.

Although we don’t actually see them get married, in the books, Marina and Philip marry and have twins.

What happens to the child Marina Thompson was carrying in series 1?

A heartbroken Marina drank a tea with ingredients designed to induce miscarriage.

However, it didn’t work as, some time later, she felt thereby move in her stomach.

She was last seen heading out of town in a carriage with Philip.

What’s next for her in season 2?

Ruby Barker is set to return as Marina Thompson in the second series.

Although nothing has been confirmed, we can expect to see a lot more of her and Philip Crane.

However, if it’s anything like the books, it could be a heartbreaking season for Marina fans.

What happens to Marina Thompson in the books? How does she die?

Despite marrying Phillip Crane and having two children, Marina isn’t happy with her life.

She is believed to be suffer from depression and even attempts to take her own life by drowning herself in a lake.

Read more: Where did we leave Lady Danbury in season 1? What’s next for her?

It’s unsuccessful, but eventually the young lady dies of a fever as a result of her suicide attempt.

It is through Marina’s death that Eloise Bridgerton is first introduced to Philip Crane, her future groom.