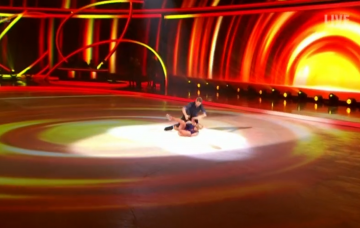 Brian McFadden tumbles out of Dancing On Ice after nasty fall

Luckily neither were seriously hurt

Westlife’s Brian McFadden took a nasty fall after dropping his partner onto the rink during the Dancing On Ice skate-off.

The pop star, who was in the bottom two along with X Factor’s Saara Aalto, attempted a lift near the end of his routine to Elton John’s Don’t Let The Sun Go Down On Me.

But he lost his balance as he tried to pick up his professional partner Alex Murphy, leaving them both sprawling on the ice.

No one wants to take a tumble during a Skate-Off, let alone the one just before the Final! We’re so glad you’re okay @BrianMcFadden and @almurph18 🙏 #DancingOnIce pic.twitter.com/oEtdQwx0FB

Fortunately, the pair said they were not seriously hurt, but it meant the end of the road for Brian after the panel voted him out unanimously.

Delivering his verdict, Jason Gardiner told the singer: “It pains me to do this because, had you not fallen, this would be a very different outcome.”

Ashley Banjo said: “Brian, don’t beat yourself up too much because that is the reality of this competition and it’s tough.

“Up until the fall it wasn’t a foregone conclusion, but based on what I saw, I have to save Saara and Hamish.”

Christopher Dean added: “I want to save them both. But unfortunately we can’t and it’s based on the performance in the skate-off.”

Jayne Torvill confirmed that she would have also voted to save Saara.

Afterwards, Brian told hosts Phillip Schofield and Holly Willoughby: “It has been amazing. We’ve had such a great time.”

It means the final will be between Saara, Love Island’s Wes Nelson and ex-Strictly star James Jordan, who scored two perfect 40s on tonight’s semi-final.

* Dancing On Ice: The Final is on ITV next Sunday evening.

Did you think the judges were right to vote out Brian?   Leave us a comment on our Facebook page @EntertainmentDailyFix and let us know what you think!