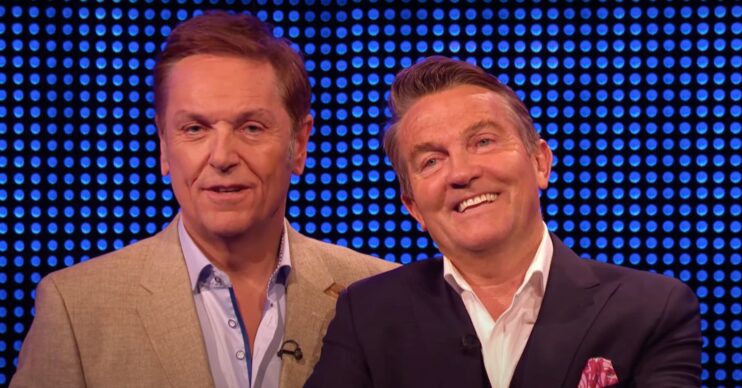 Who is Brian Conley and is he related to Bradley Walsh?

The resemblance is uncanny!

The pair have often been mistaken for each other in the past and some even believed that they were the same person.

So who is Brian Conley, why does he always get confused for his friend Bradley Walsh and are they related?

Who is Brian Conley?

Brian Conley – on the Celebrity Chase tonight (May 8) – is a British actor and comedian who’s known for hosting The Brian Conley Show.

He has also starred in many award-winning television shows such as Time After Time and The Grimleys.

Many fans have been quick to comment on how much Brian Conley and The Chase presenter Bradley Walsh look alike over the years.

The pair have always seemed to be confused for each other on countless occasions.

We are two separate people. We are now in the same room together.

Some have even been convinced that they were the same person!

When the comedian was a guest on The Chase, the repeat of which airs today, the pair stood next each other to confirm that they are two separate people.

Brian joked: “We are two separate people. We are now in the same room together.”

Bradley responded: “Everyone mistakes us, don’t they?”

Brian then continued: “A woman came up to me and said: ‘Can I just say you really look like Bradley Walsh?’ and then said: ‘No offence.'”

Brian Conley and Bradley Walsh are not related, however, they are good friends.

They even had important roles in each other’s weddings.

Speaking to Radio Times, Bradley said: “We are close – we were ushers at each other’s weddings and at one time, we even lived on the same road in Watford.”

What has Brian Conley said about it?

In an interview with Radio Times, Brian Conley admitted that the pair are often mistaken for each other.

He then went on to detail several occasions where they have been confused for each other.

Brian, who starred in Dolly Parton’s musical 9 to 5, said that he was approached by fans outside the theatre who thought he was Bradley Walsh – despite his name being on the theatre poster.

He also recalled: “When Bradley came to my opening night in 9 to 5 the Musical, he was being approached by the show’s press team for interviews because they thought he was me.”

However, Brian has confessed that he probably won’t get mistaken for him anymore after lockdown.

He said: “Mind you, I won’t get mistaken for him anymore with my new lockdown look – I’m all grey and I’ve got a beard, so now I’m more like Martin Kemp… a younger Martin Kemp, though, to be honest!”

So will you be tuning in tonight? Leave us a comment on our Facebook page @EntertainmentDailyFix and let us know.