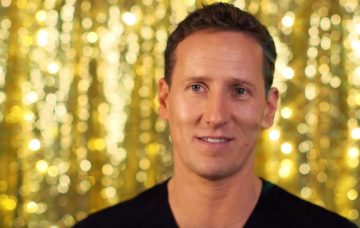 Can he dance AND sing?

Brendan Cole could be set to make a sensational return to our television screens.

The Kiwi star, 43, was axed from Strictly Come Dancing following the 2017 series, in which he was partnered with Good Morning Britain presenter Charlotte Hawkins.

But according to a report, Brendan is being lined up to swap his dancing shoes for a microphone in Simon Cowell’s new show, Celebrity X Factor.

According to The Sun Online, ITV bosses want Brendan to showcase his vocal talents because they think it’ll make great TV – and Brendan is keen to do it.

A source told the website: “Brendan is a big character and the bosses are sure that he will be a big draw for their audience.

“For Brendan’s part, he’s excited about the prospect of a new challenge.

“It’s also not lost on him that appearing on a rival channel in a big prime-time slot is a bit of a two fingers up at his old bosses at the BBC.”

Brendan admitted that he was “in shock” after finding out that his Strictly contract wasn’t being renewed by the BBC.

But appearing on Good Morning Britain in February, he revealed that his diary has been pretty chocka since then.

“I’ve had a massive year,” he insisted. “I’ve not stopped, which is nice because I think that’s the fear whenever something like that comes to an end.

“It’s like: ‘Crikey, what if the phone doesn’t ring or what if there’s nothing else out there?'”

Brendan is the latest in a long line of celebrities rumoured to be appearing on Simon Cowell’s show – one of two new editions of The X Factor to be screened later this year.

Britain’s Got Talent judge David Walliams, The Chase brainbox Jenny Ryan and Corrie actress Lucy Fallon are also reckoned to be in the frame.

There is also said to be a ‘champions’ version of the singing show, where past winners will come back to compete against each other.

A couple of days back, Brendan Cole took to Instagram to upload a lovely tribute to his wife Zoe, nine years after they tied the knot.

Alongside a picture of them kissing, he gushed: “To my gorgeous wife @thezoec. Happy 9th wedding anniversary baby!!!”

He added: “One of my favourite photos ever! Well, photo of a photo, as I can’t find original!”

Entertainment Daily! has contacted Strictly and The X Factor representatives for comment on this story.